The first institutional solo exhibition of Lorna Macintyre (born 1977 in Glasgow) in Switzerland bears the title Form and Freedom, a wording which is taken from the book I Wanted To Write A Poem: The Autobiography of the Works of a Poet by the American poet William Carlos Williams (1883-1963). In 2007, the artist completed the MFA at Glasgow School of Art during which she spent a semester at Hunter College in New York. With solo exhibitions at Transmission Gallery, Glasgow, at the ICA in London, with periodic representations in the galleries Kamm, Berlin and Mary Mary, Glasgow and her participation in many international group exhibitions, Macintyre has been the subject of much recent attention.

In the work of Macintyre, there is the interplay of sculptures, installations, found objects from nature, simple everyday objects, collages, prints and photographs. She works specifically with the respective exhibition spaces and correlates the works conceptually and scenically. Her choice of materials and vocabulary of shapes are decisively influenced by analogies between the man-made and the natural, between nature and culture and other nuances of these oppositions. Inspired by selected works of literature, the artist constantly creates a poetic course in which the signs and symbols existing in the works entangle the viewer in a network of relationships, and, at the same time, showing him alleged possibilities. For the exhibition at the Kunsthaus Baselland, the artist shows a series of new works that engage the poem Four Quartets by T.S. Eliot. Macintyre combines each of the four chapters of the poem with one of the four elements of earth, water, fire and air. In this way, the piece The Past Has Another Pattern, resulted from solarization, is linked to the element of water, with downward triangle shapes representing the alchemical symbol for water. Words Move, Music Moves is the title of a work hanging from the ceiling and composed of one aluminium and one steel cable that show quite subtle moves depending on the airflow in the room. Every Phrase and Every Sentence is an End and a Beginning is a sculpture of chained triangles of welded copper mounted on the wall that represents, since the tip of the triangle is facing upwards, the alchemical symbol for fire. Love is Most Nearly Itself When the Here and Now Cease to Matter is the title of a work that relates to the element of earth. This installation, consisting of a mirror and a stone-circle on top of it, is a reminiscent of the cultic, the archaic and the historic; the mirror throws the mirror image back, as a gesture of love.

In other works, Lorna Macintyre takes on the topics of seasons and natural phenomena. She uses techniques like the Cyanotype (blueprint, iron blueprint), in which she exposes papers that are treated with photosensitive chemicals to sun- or moonlight. The resulting randomly generated forms are abstract entities that here and there are able to recall landscapes. More black and white photographs symbolize Winter and Spring, another series in turn abstract portraits of the Charites (in Greek: Three Graces): Euphrosyne (Mirth), Thalia (Good Cheer) and Aglaia (Splendor).

In Macintyre’s wooden base sculptures one finds alchemical thinking and visual metaphors that open up by way of the used materials and their composition. In The Saturn Return, she sets up lead weights that were found by a metal detector. In alchemy, the metal lead is associated with the planet Saturn. The Saturn Return refers to the astrological phenomenon that it takes Saturn about 29.5 years to finish one revolution around the Sun. The title of the sculpture What the Thunder Said cites T.S. Eliot’s Waste Land. The tin sticks eludes to a thunderbolt, the symbol of Jupiter; the alchemy also assigns the metal tin to that deity. In the north-south orientation of the long window space at the Kunsthalle Baselland she places in each of the six windows a sculpture on a wooden base that reminds one of a totem. Each time, the use of a different metal generates a new alchemical reference: silver represents the moon, the sun is gold, copper is associated with Venus and the feminine and the masculine with iron.

Lorna Macintyre’s interest in non-linear narration is striking. She works with literary quotations and arranges, often guided by chance and intuition, materials that adopt in correspondence to the compositional arrangement the shape of visual metaphors. By doing so, the titles are just as important as the role of the artist as the “author” leaving traces of the working process behind while revealing the path of development. It is as if it is being spoken with many voices simultaneously. 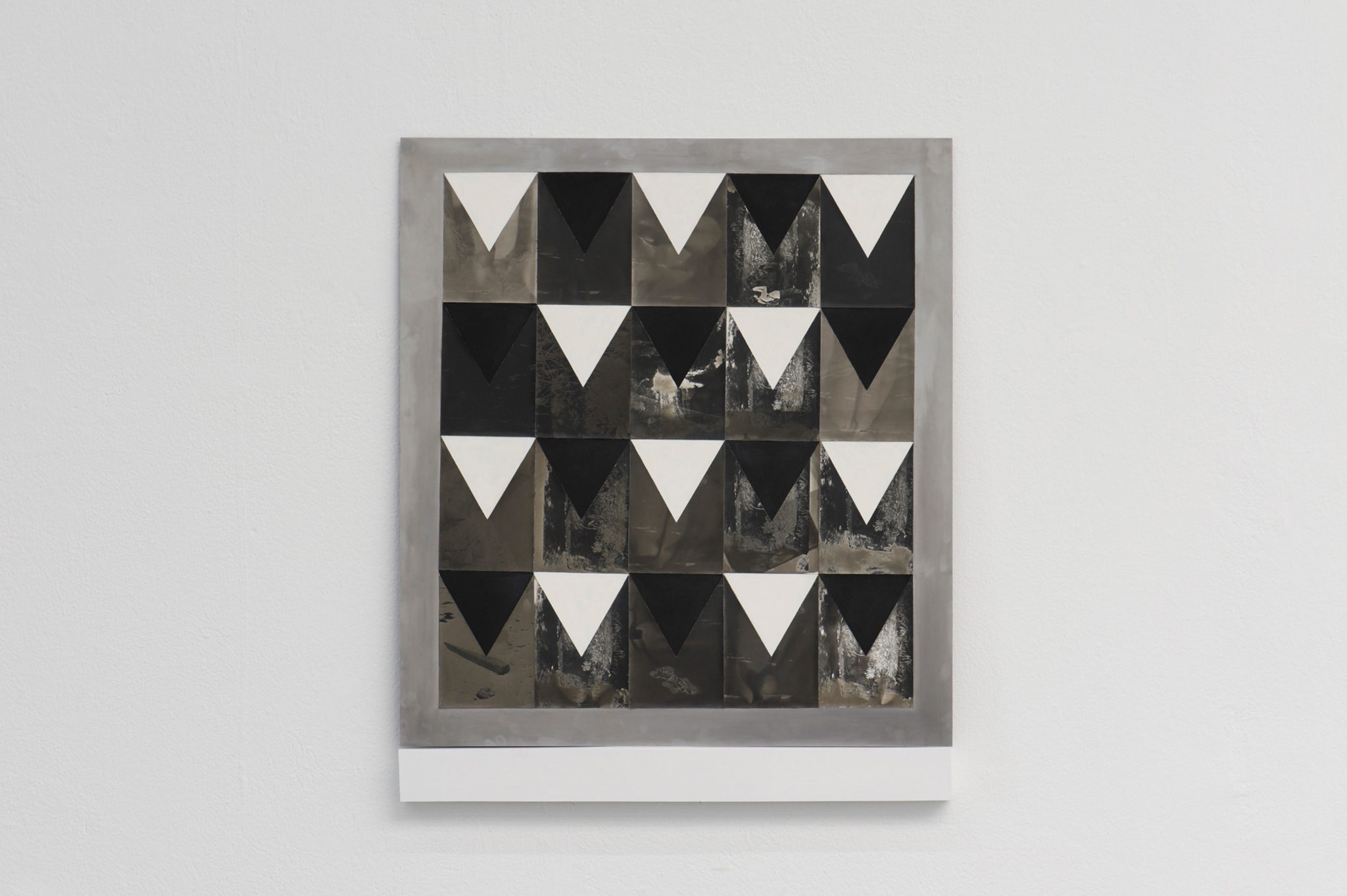 The Past Has Another Pattern, 2009
Silver Gelatin Prints and enamel on steel, wooden support 74x82cm 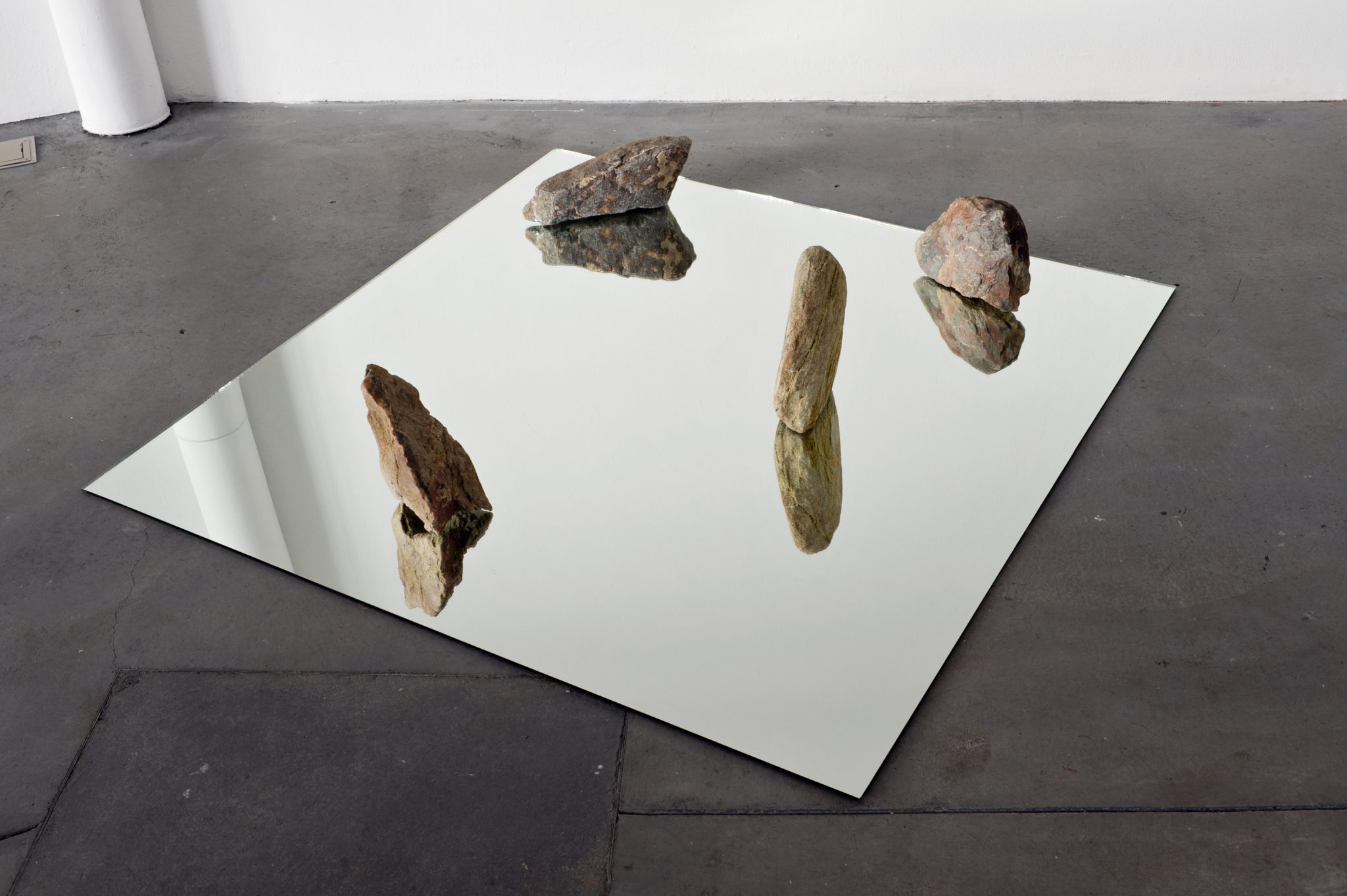 Love is Most Nearly Itself When The Here and Now Cease to Matter, 2010
Mirror, stones 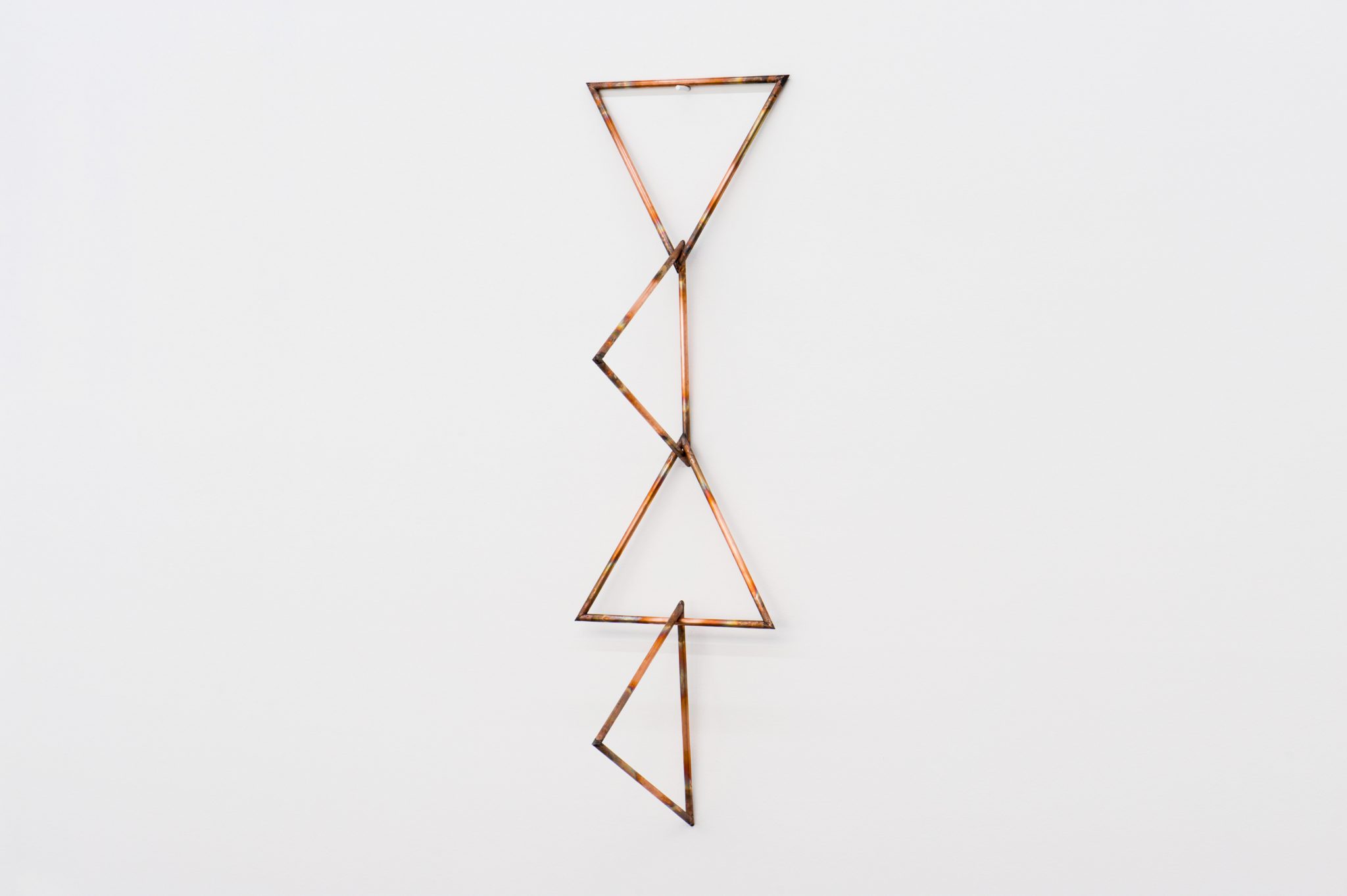 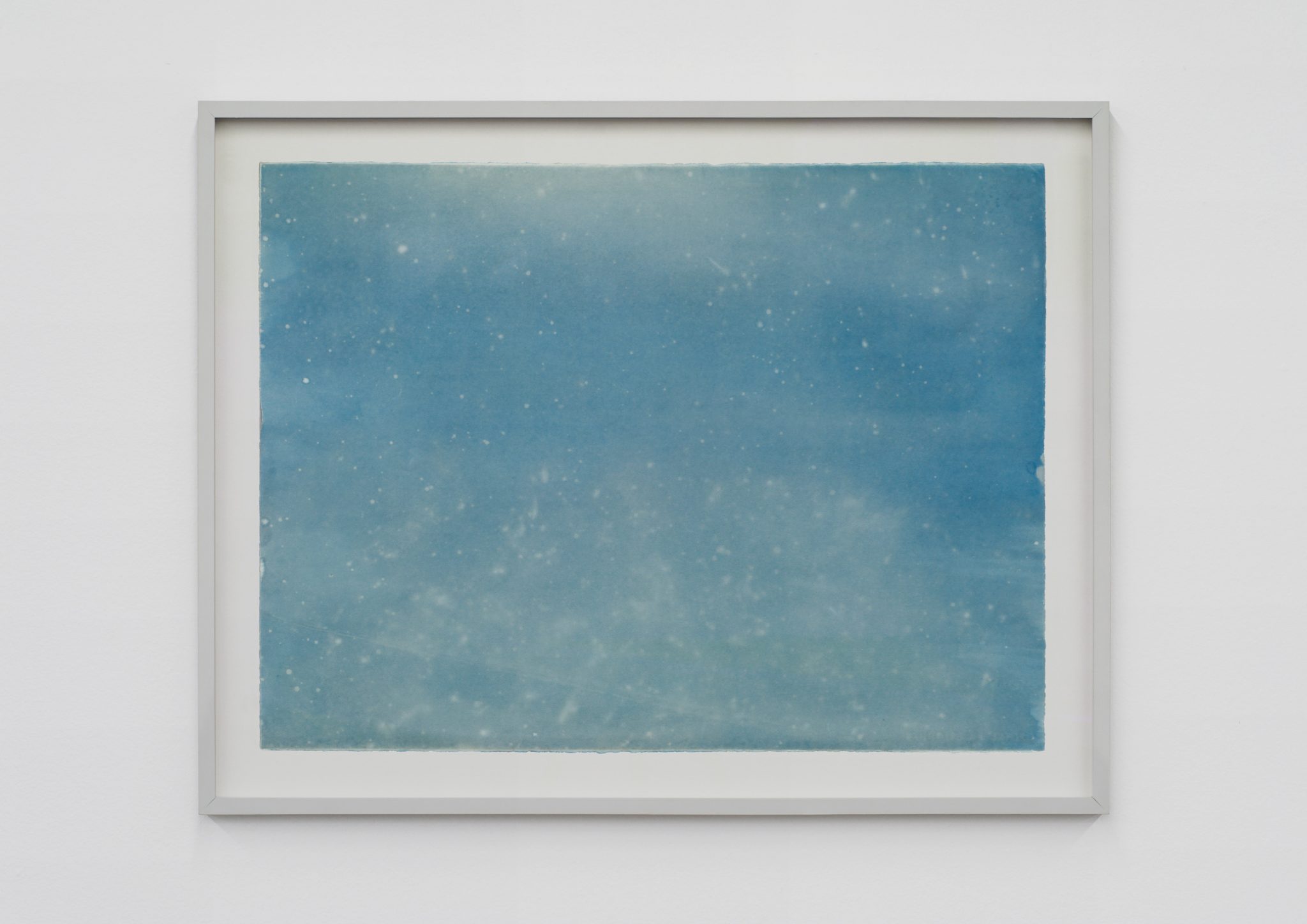 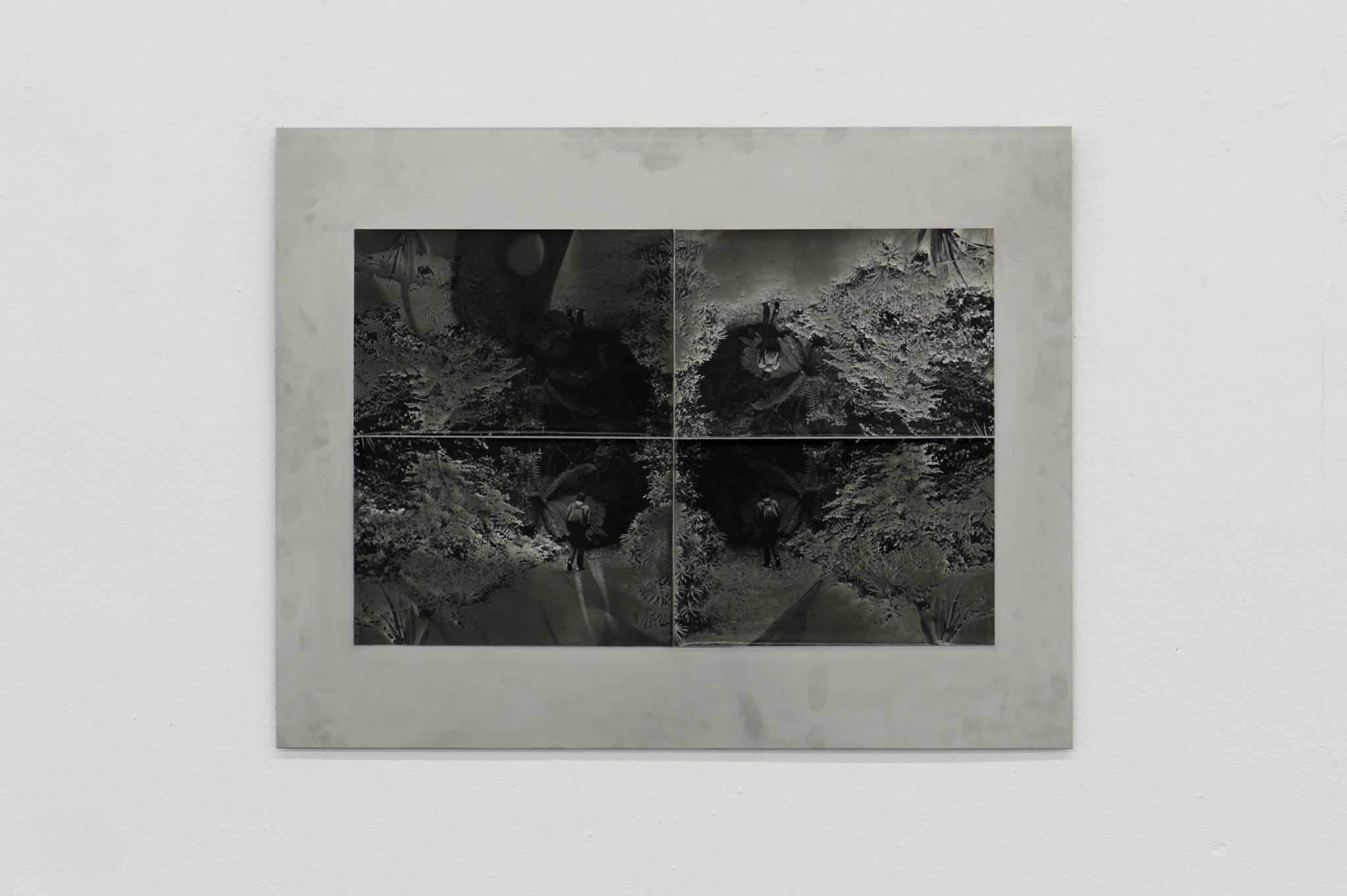 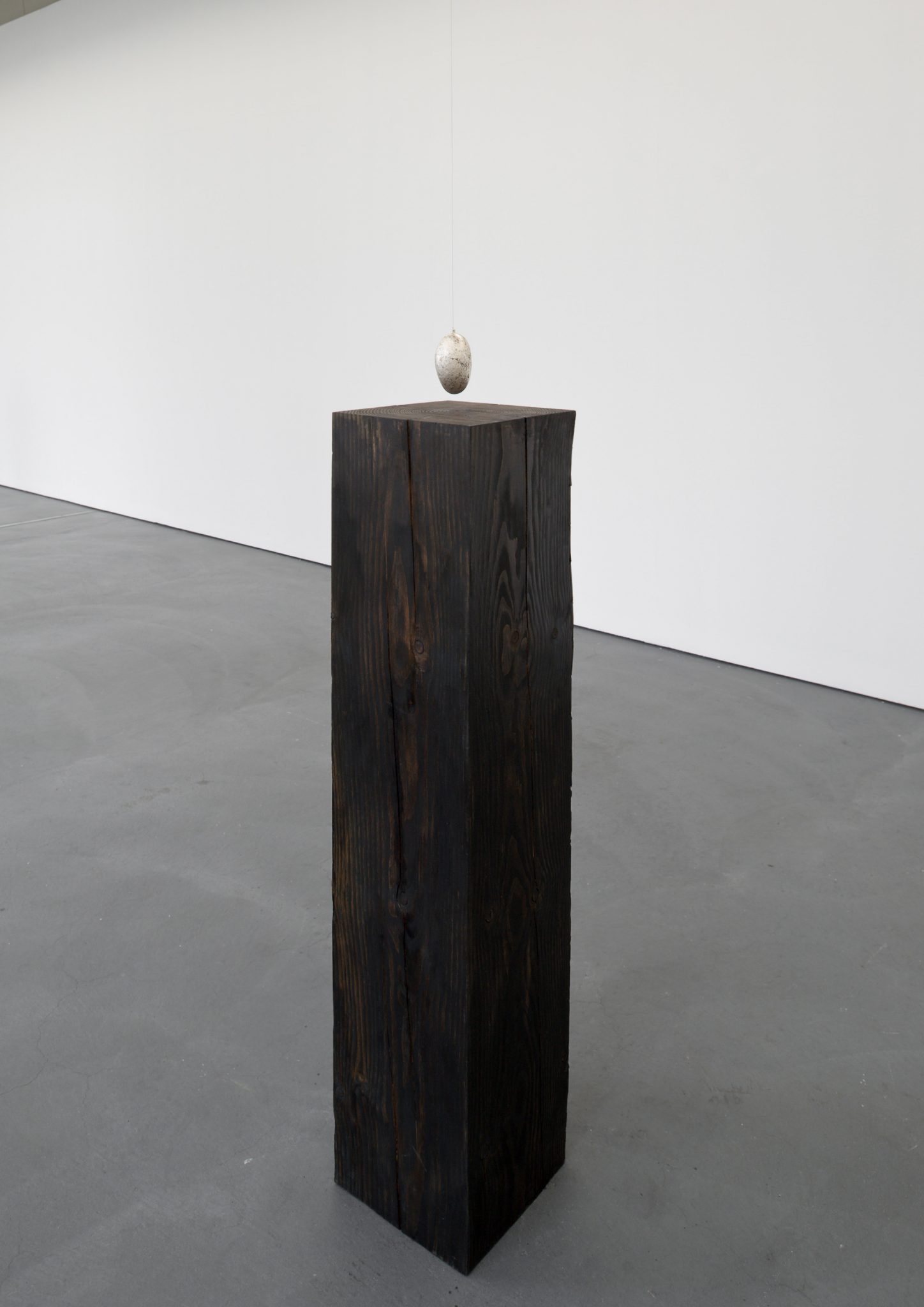 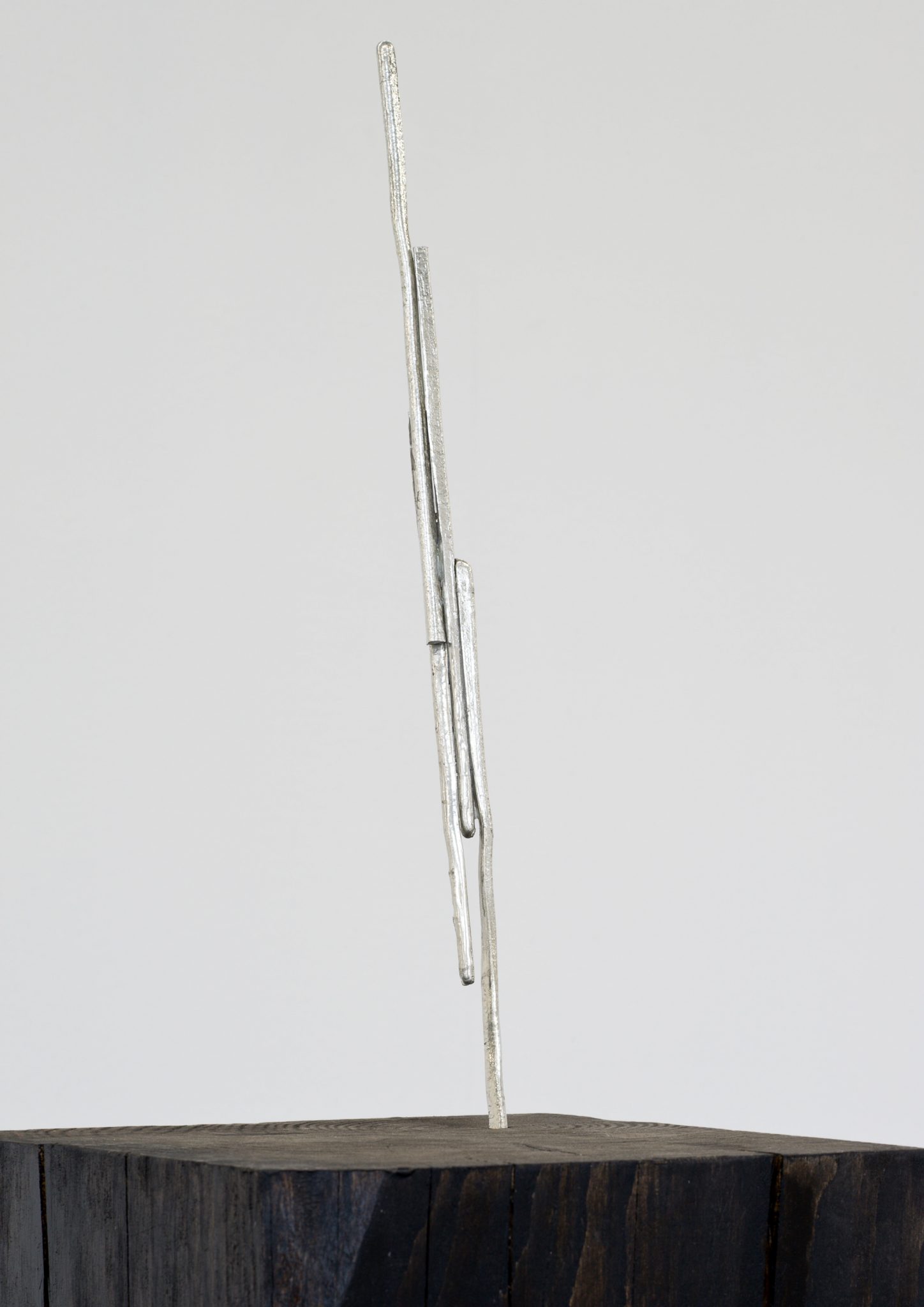