Scottish artist Lorna Macintyre uses a broad spectrum of influential touchstones in her work, from poetry and literature to archaeology and symbolism. These references often create a conceptual foundation for her artworks, lending a form for a composition or providing the impetus behind her choice of materials. Pieces of You Are Here debuts a new body of work commissioned for DCA.

Macintyre has long been interested in exploring the potential of the materials she uses, often pushing them playfully to develop in unexpected ways. This exhibition includes silver gelatin prints, cyanotypes, digital prints on silk and paper, as well as new sculptural forms and installations.

Photography and sculpture are of particular interest to Macintyre. In her work she considers how these artistic disciplines can intersect and overlap: how photographs can exist in space as tangible objects and how, like sculpture, they can communicate the physicality of the material world.

The photographic artworks in the exhibition foreground this materiality in different ways; many inhabit three dimensional space rather than simply existing on a two dimensional plane. Framed photographs lean on the walls, resting on blackened timber beams [1 and 11 on floorplan], whilst others have been printed on silk and hung on charred branches, free from both the walls and the restraints of typical framing techniques [12, 14, 15]. In one work a photographic image of water is printed on silk which has then been dyed a deep indigo colour before being soaked in the liquid it represents: water exists here as both subject matter and raw material [4].

Other compositions in the gallery also hint at or make use of photographic processes. There is a suite of beautiful blue cyanotype prints that have been created by dropping offcuts from the silk photographs onto chemically treated paper which was then exposed to sunlight over the summer months [2]. Elsewhere, the artist has grown crystals from the same chemistry used in the cyanotype paper coating process: some of these structures have grown during a summer heatwave and have a dense, spiky appearance whereas others grown during colder months are softer and less structurally developed [3]. Here, Macintyre is interested in the overlap between substance and time – how an artwork can form a record of the conditions under which it was made.

A particular focal point in the exhibition is a photograph of an archaeological artefact housed within The McManus collection here in Dundee: a small terracotta tile excavated from the nearby Carpow Roman Fort in Abernethy that bears a paw print made by a dog who, centuries ago, walked across this clay surface as it was drying [11]. The artist was drawn to this fragment of our past, intrigued by the way in which it captures a moment in time and acts as a unique historical record. Macintyre has commented on her attraction to this ancient object, saying:

“There’s a poetic distinction between the permanence of this material and the lightness of the movement across it – it forms a kind of photograph in a way – a trapping of a moment in time. This is something I’m trying to build into the works in the show as a whole – this contrast between the solidity of objects and the fleeting presence of light, gesture, accident or imprint upon them.”

This image of the paw print became a starting point for other works in the gallery focusing on the hand: its ability to deliberately craft and create as well as its unconscious gestures and unknowing traces. There are objects on display that bear the imprint of human use such as cutlery and crockery [8, 3, 13, 16] as well as new ceramic sculptures that humbly show their maker’s mark [8]. At the back of the gallery, a new film work depicts the artist’s new-born daughter’s hand grasping at the air around her, creating instinctive, exploratory movements across the screen. [10]

Many of the artworks in the gallery allude to domestic interiors, making public what is otherwise understood as a private realm. The photographs of flowers that we see were taken in the artist’s own home, and the titles of these artworks are the names of the loved ones who gifted these blooms [12, 14, 15]. In the publication that accompanies this exhibition, poet and writer Quinn Latimer reflects on the quiet poignancy of some of these works:

“You imagine the time before the image: Cathy, her gift, her body offering this body, its bouquet, that fragrant and voluptuous rush. You imagine the artist’s family receiving it. Putting this body in water. Watching the flowers drink and fade and fall for it. Noting the light and the light changing. Feeling time. Knowing it is time to take a photograph.”

Like the various representations of water across the room, these floral images also contain material traces of the domestic space they depict. Each silk photograph has been stained with fruit from Macintyre’s home; pomegranate, grape and cherry juice permeate these pieces, even if we as viewers can’t see figurative depictions of these things in the photographs.

All of this new work has developed slowly and intuitively over the past 18 months in the lead up to this presentation at DCA. There is a fluidity running throughout the exhibition – both in the processes of production and in the finished works themselves – an overlapping where one work ends and another begins. Pieces of You Are Here is an exhibition replete with edges, thresholds and other permeable membranes that allow complex thought and emotion to drift through. 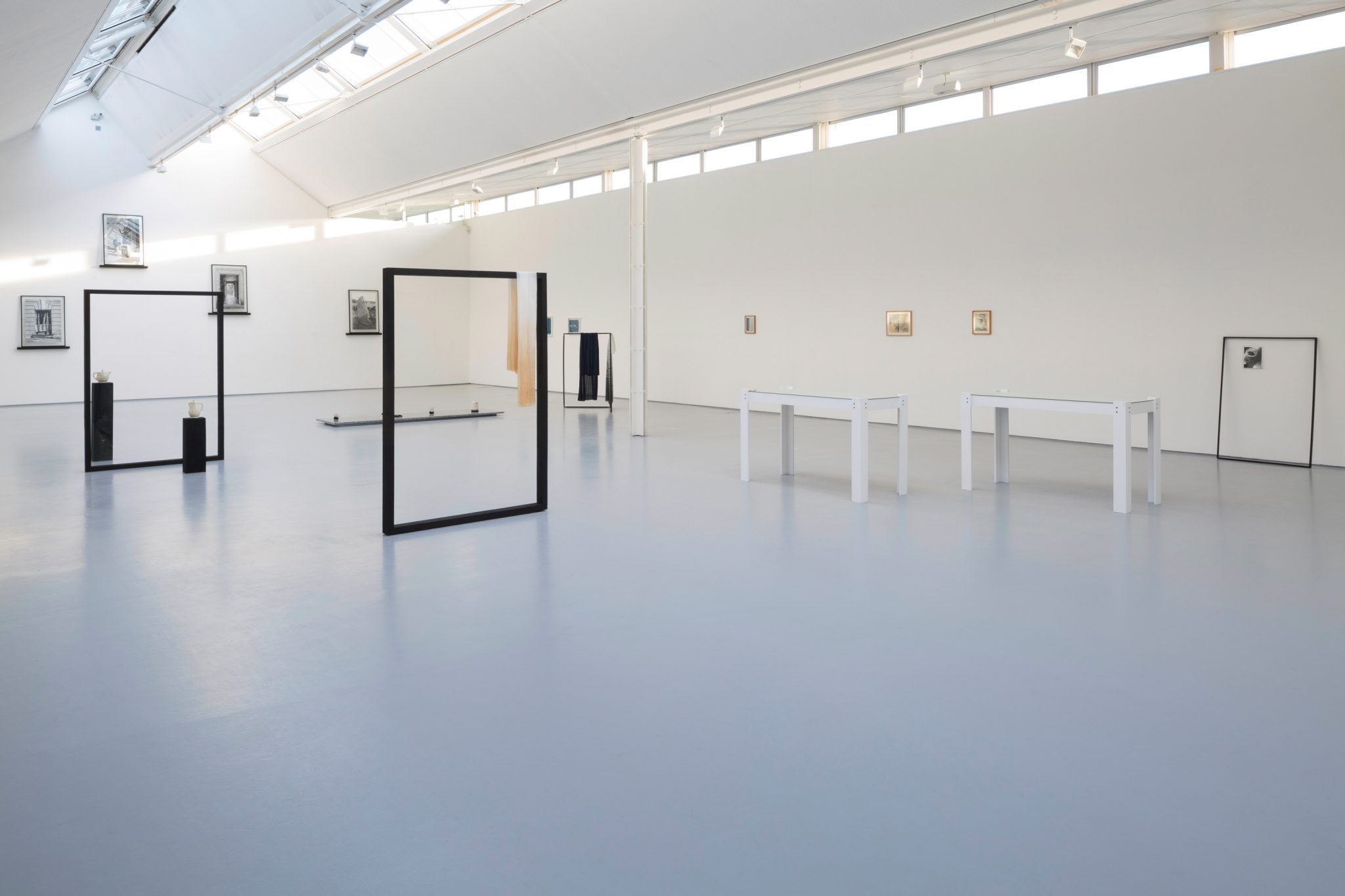 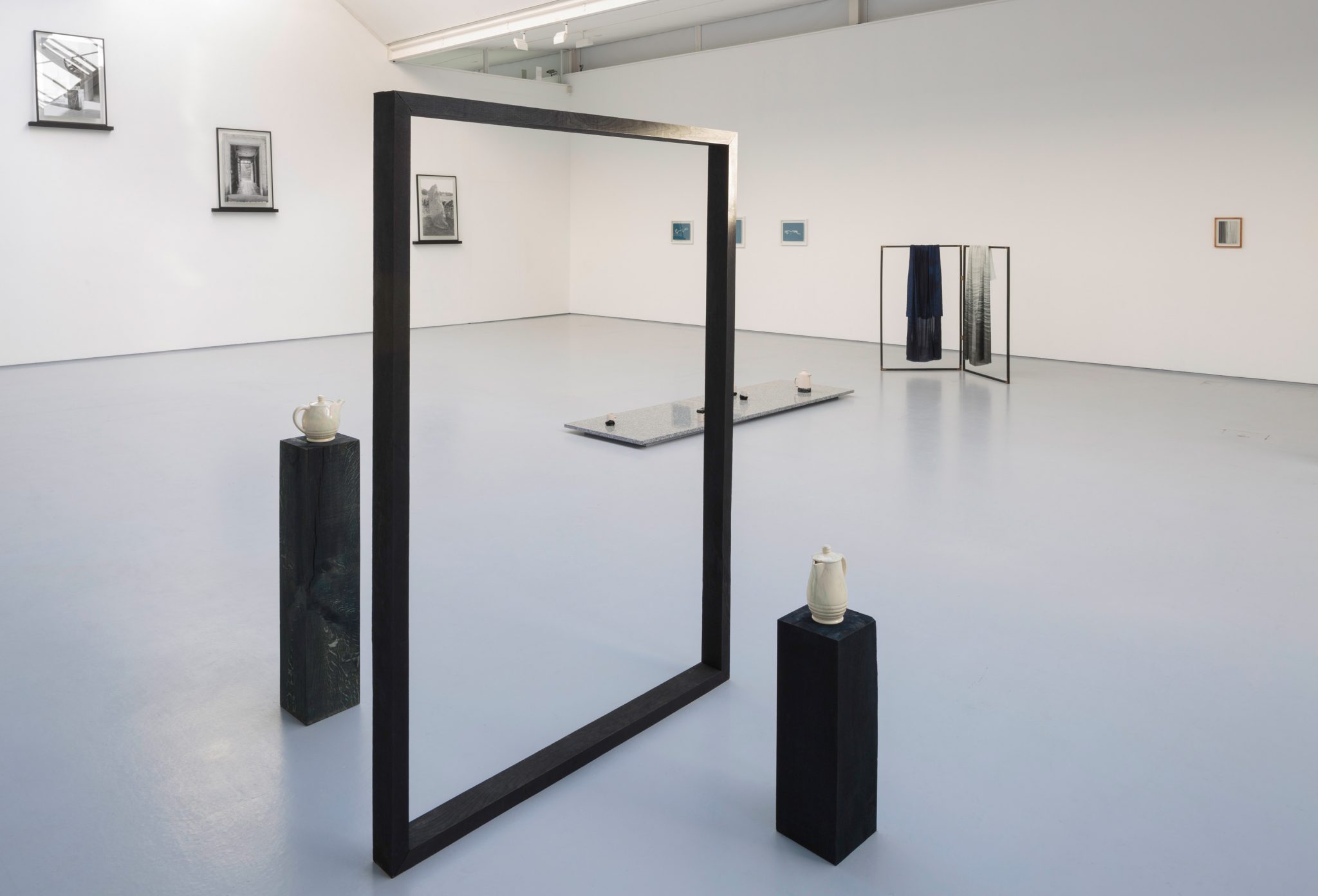 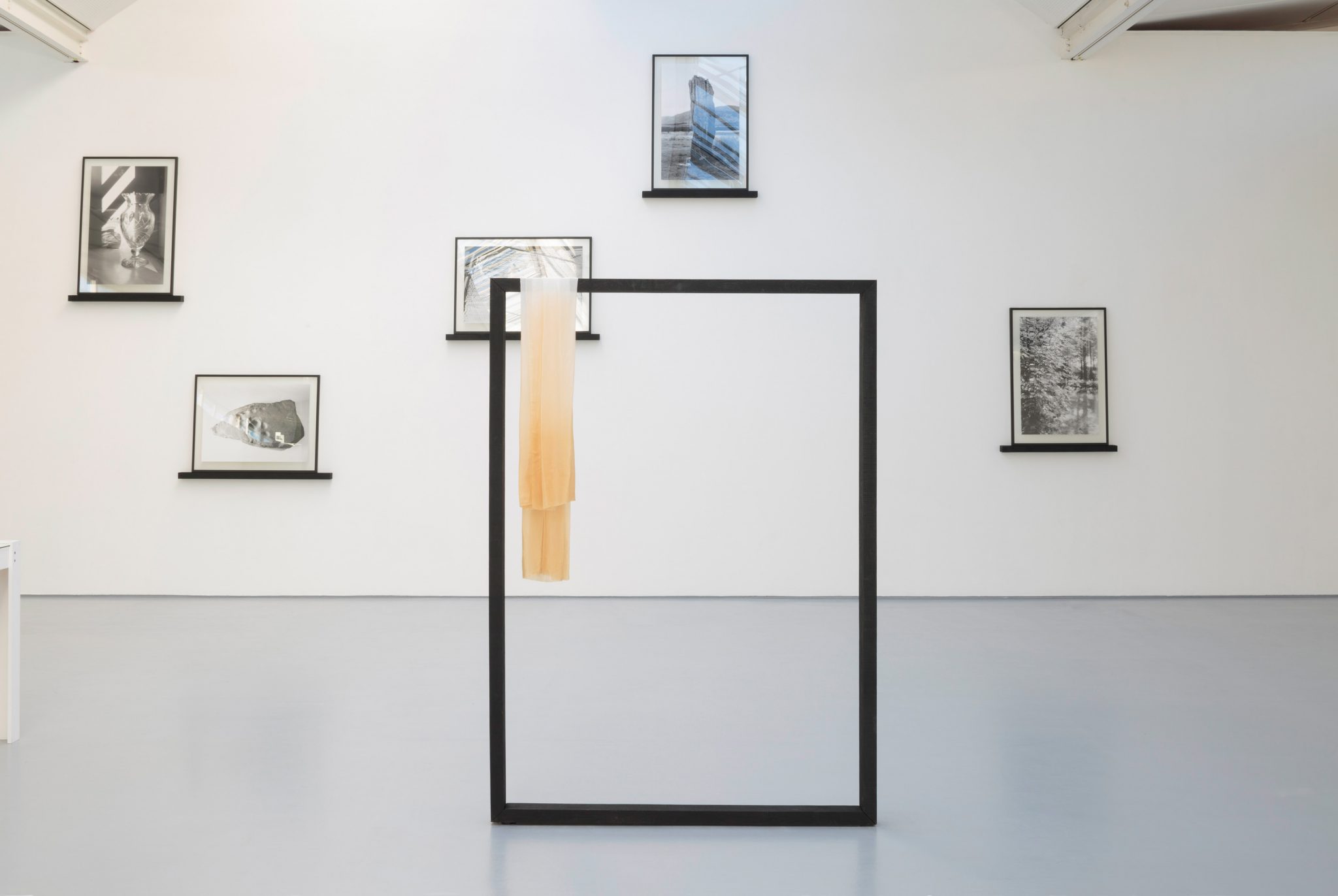 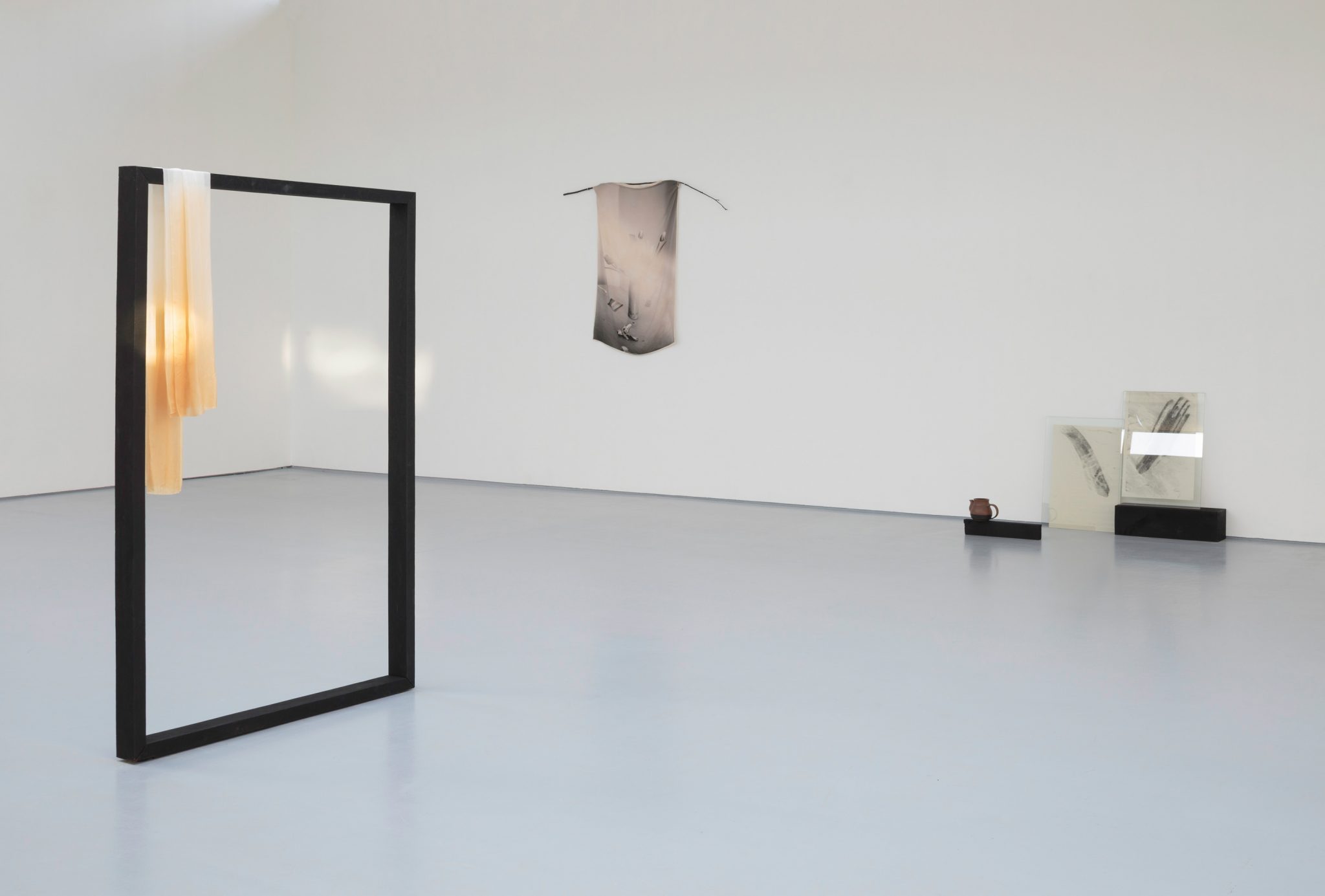 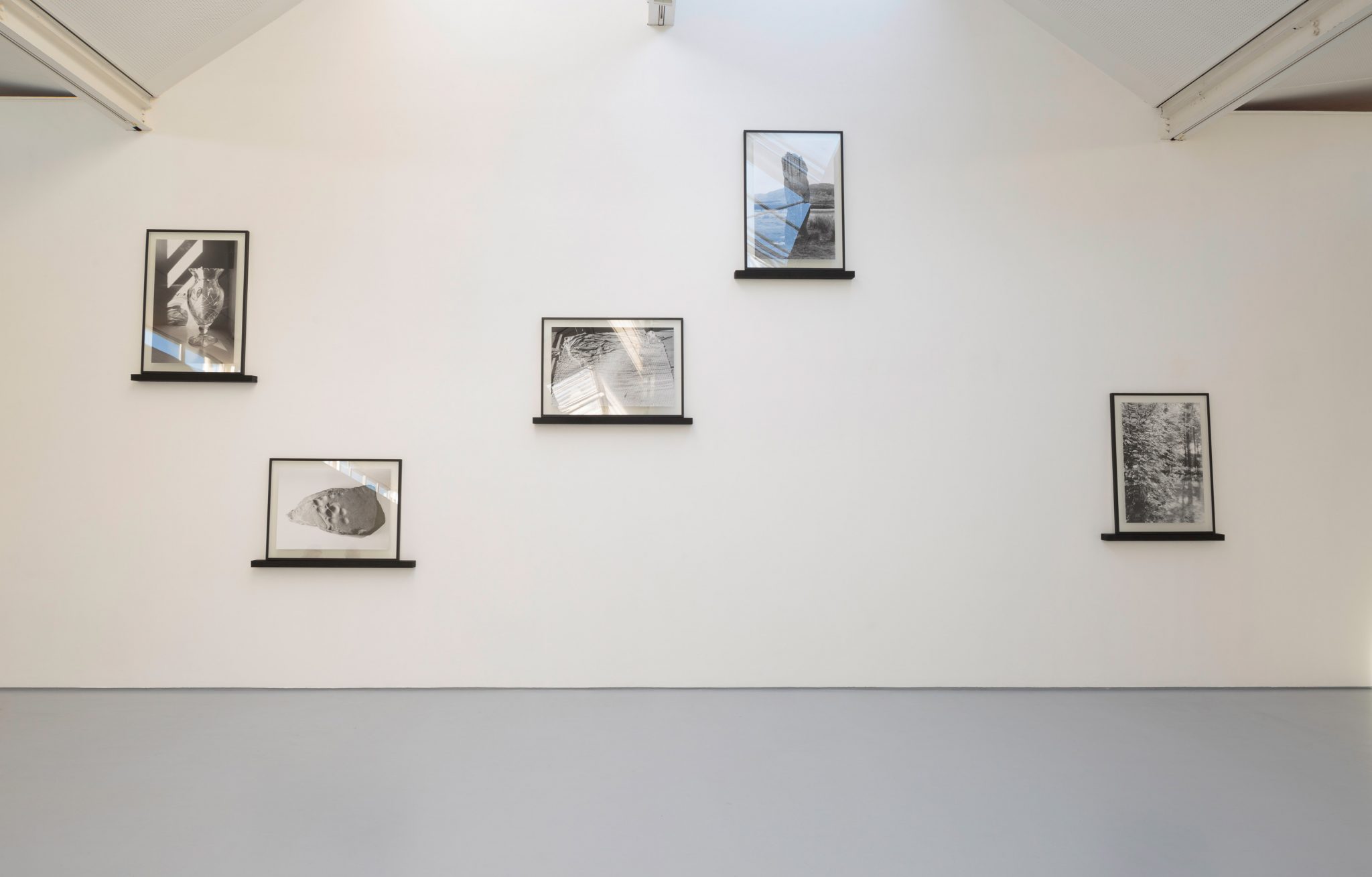 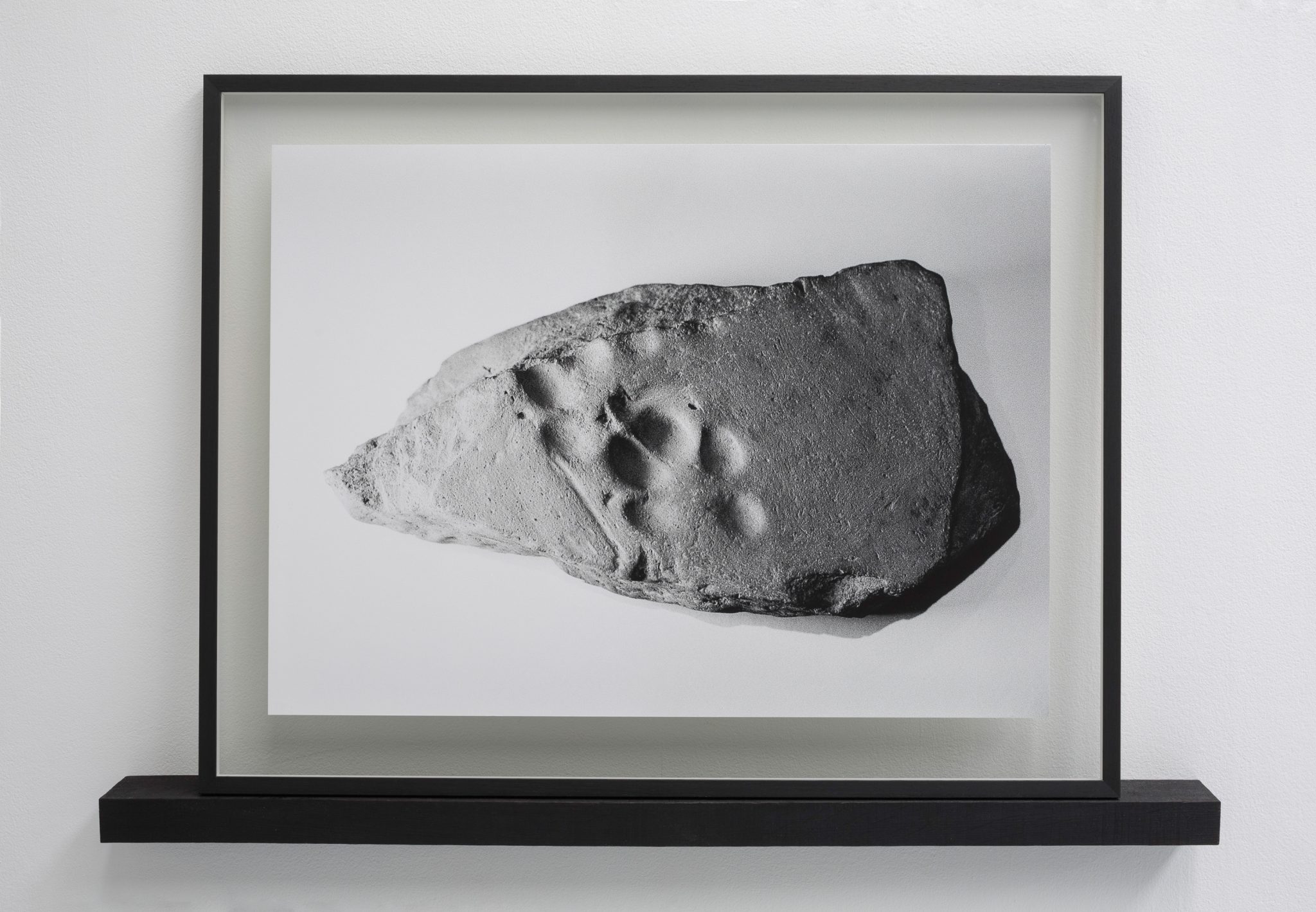 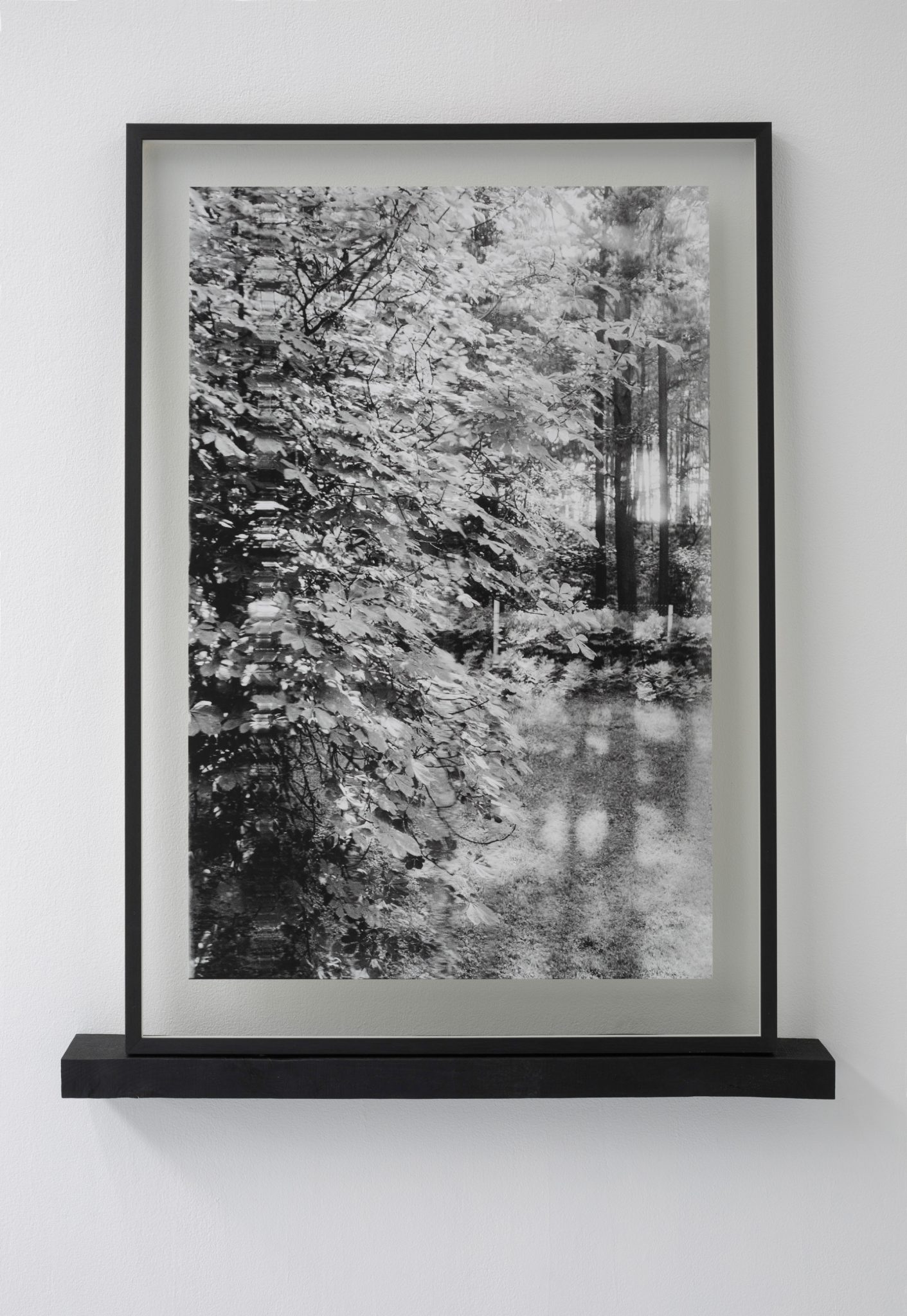 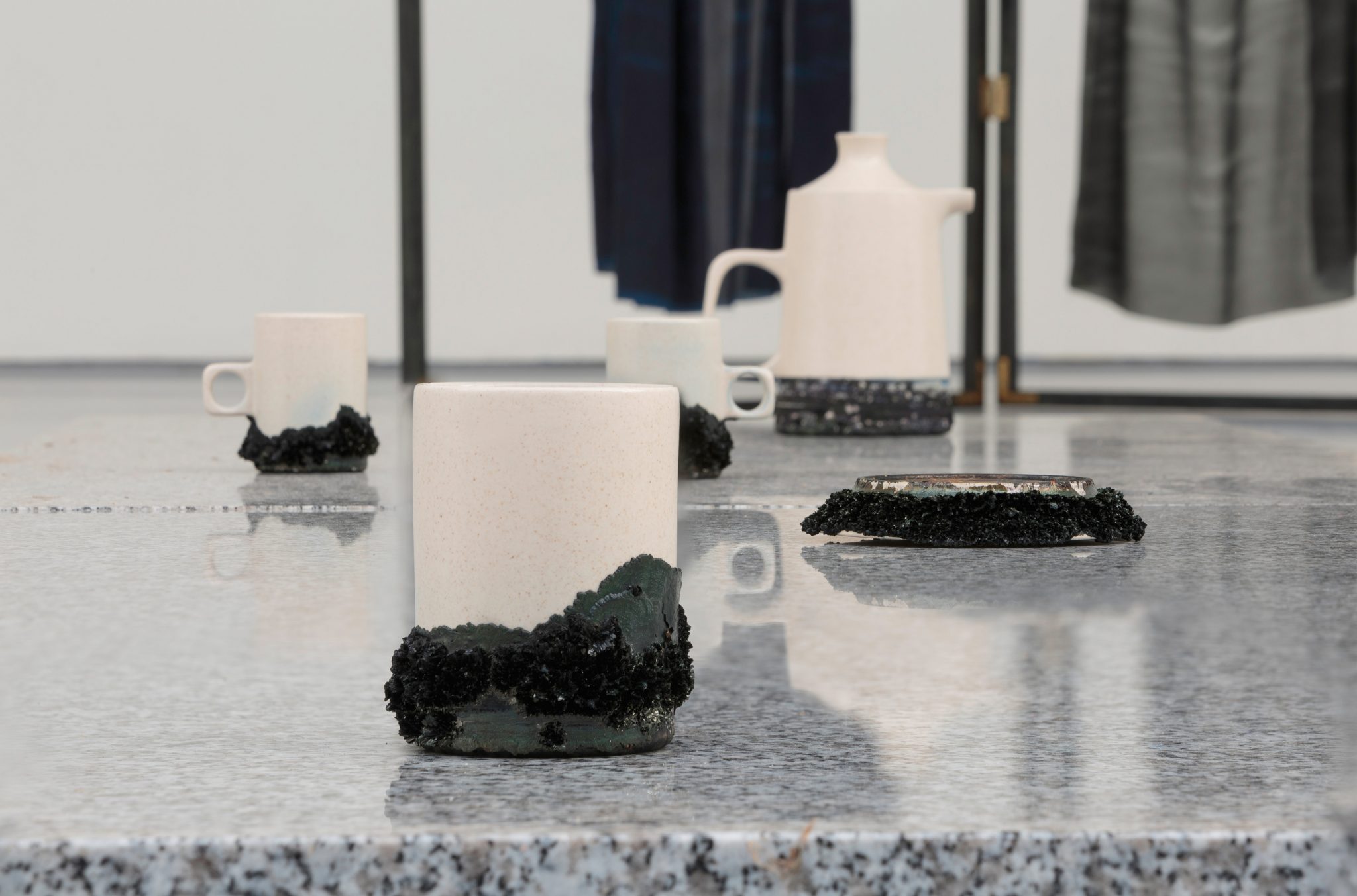 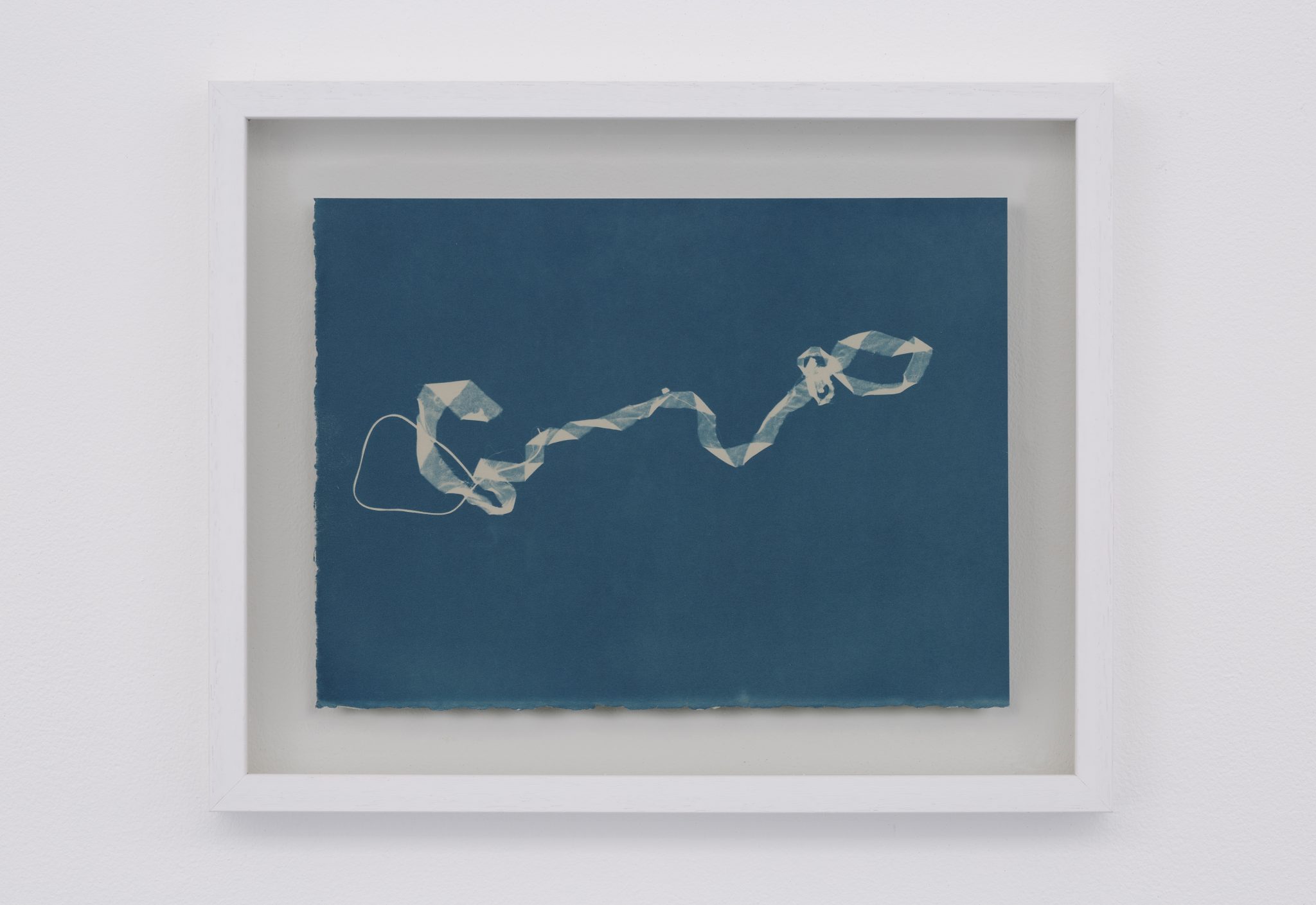 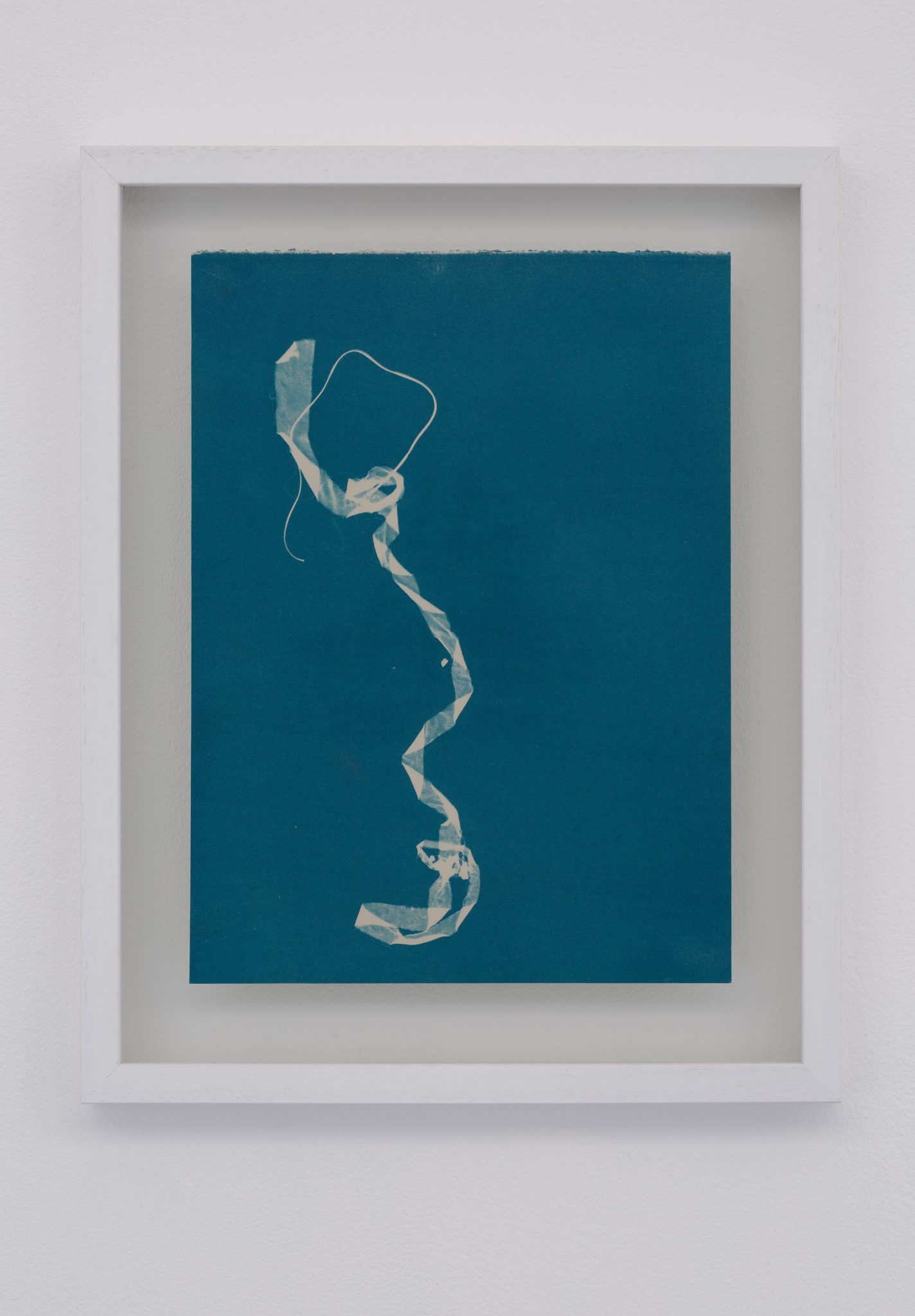 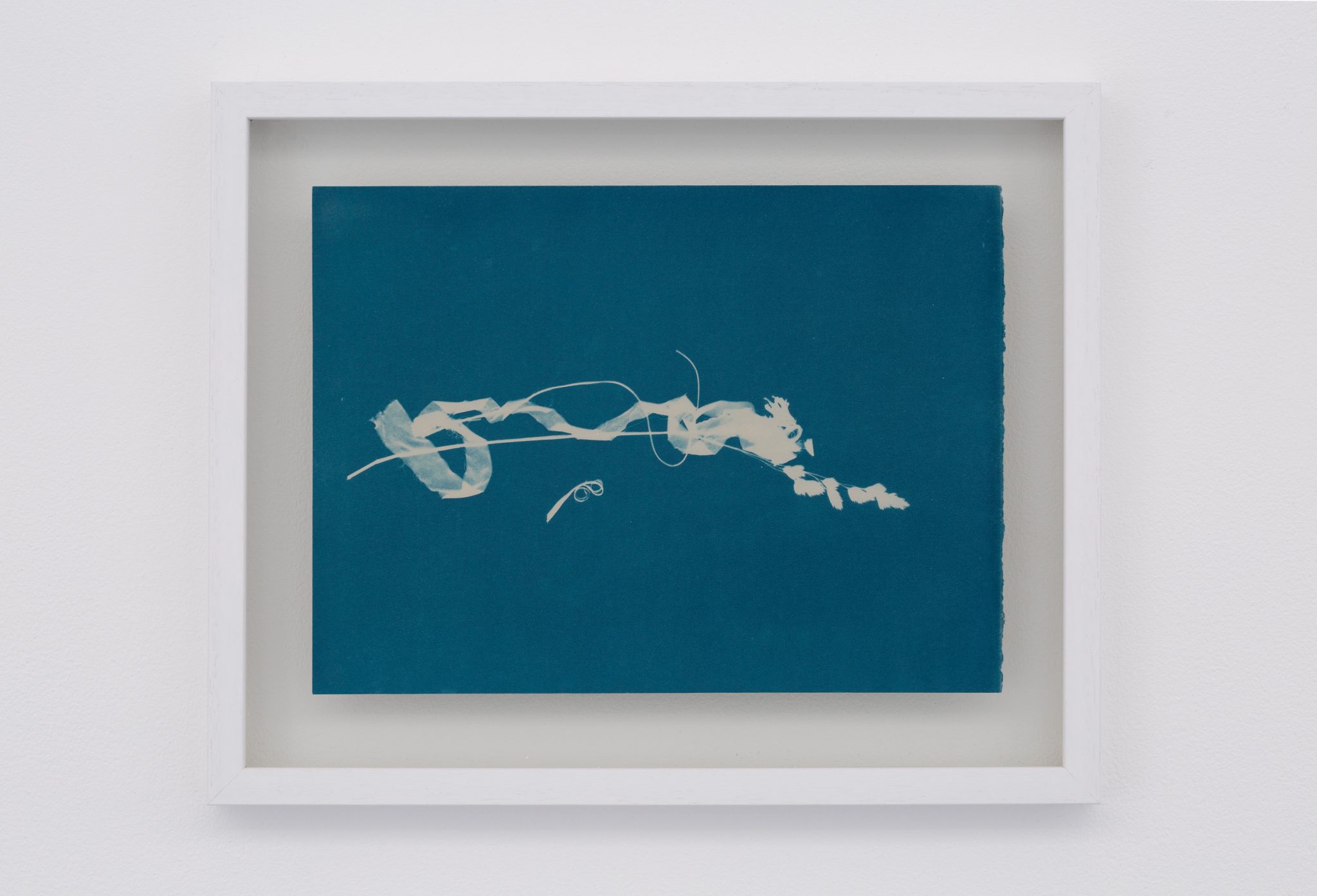 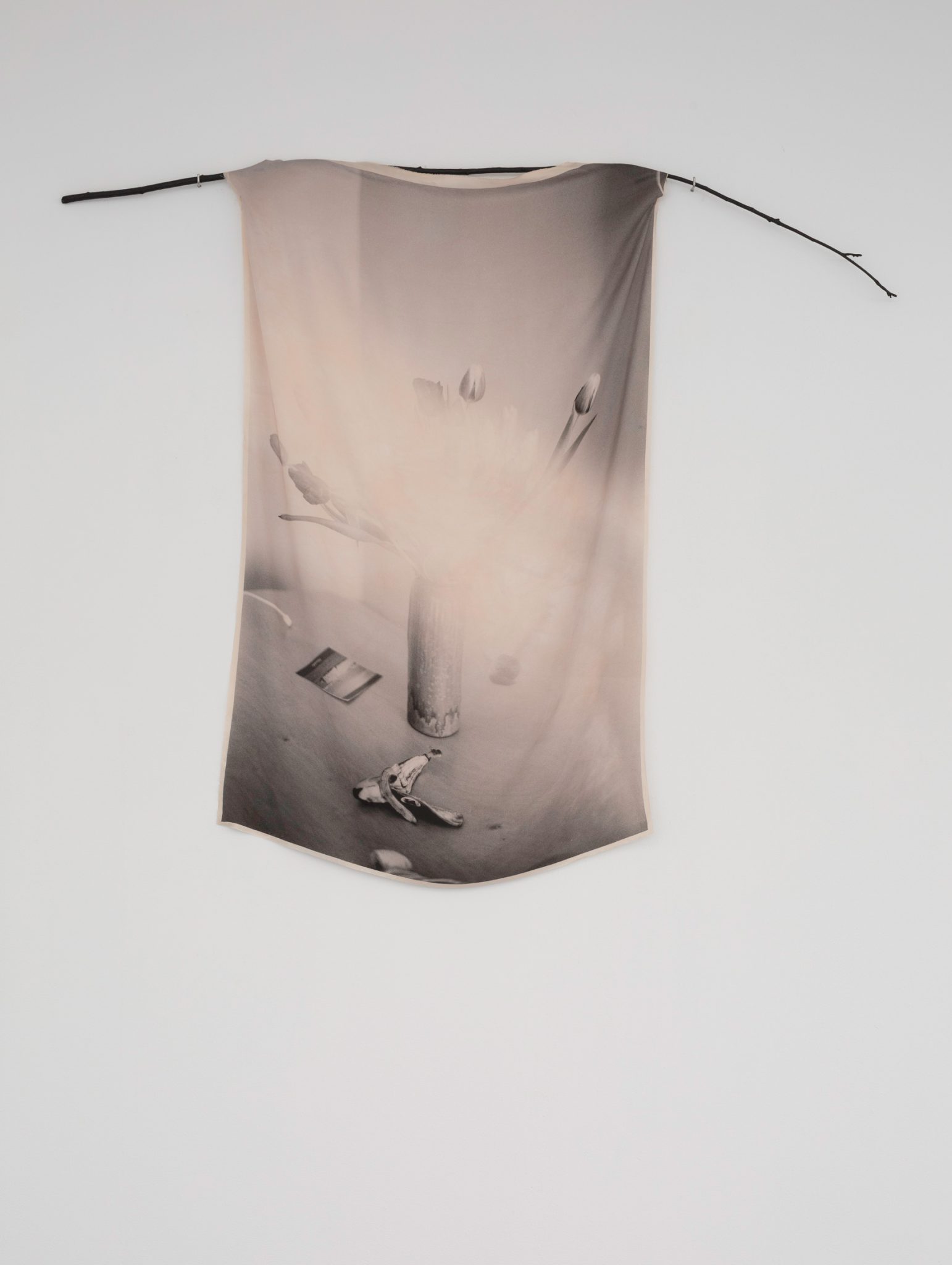 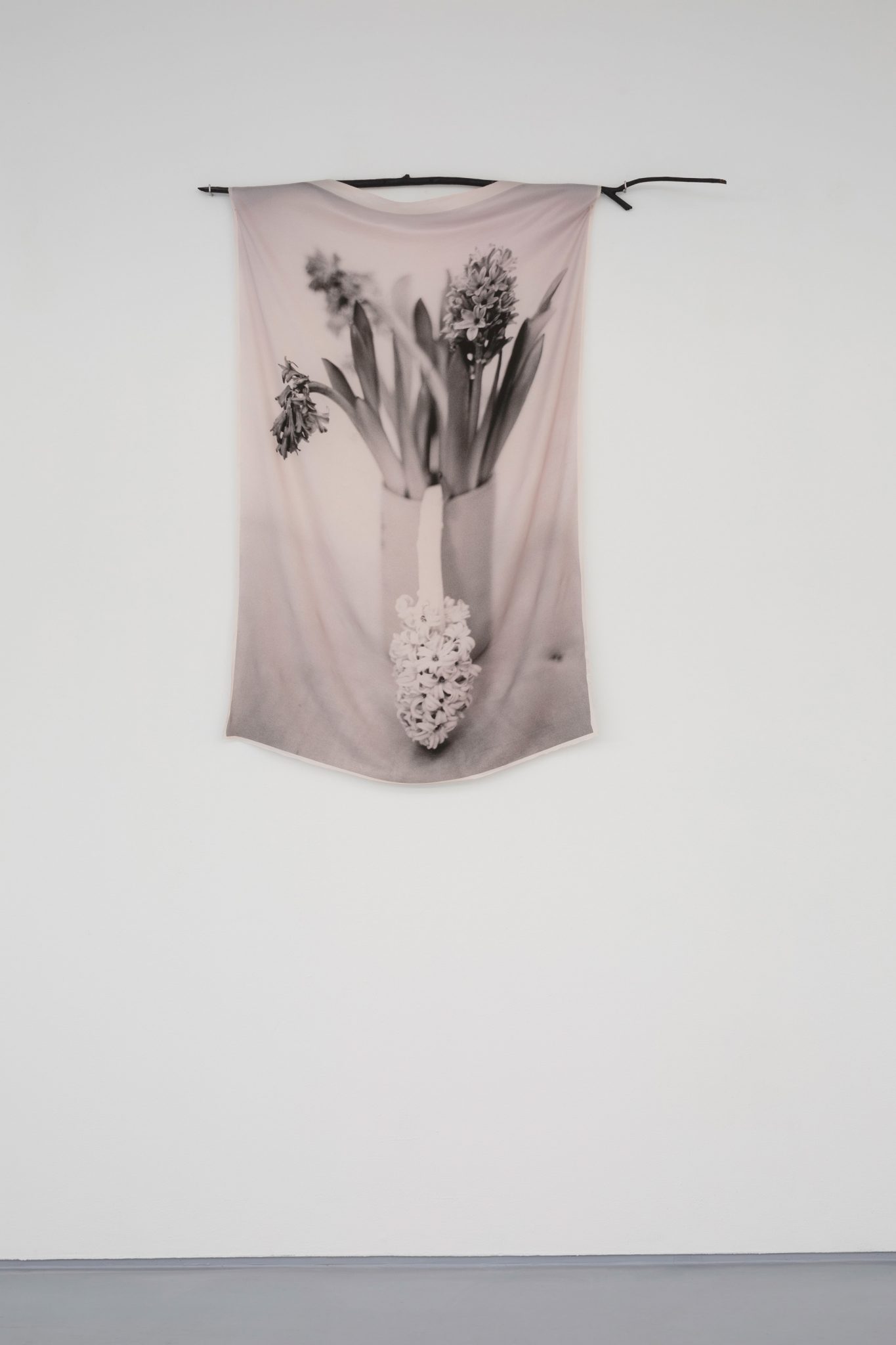 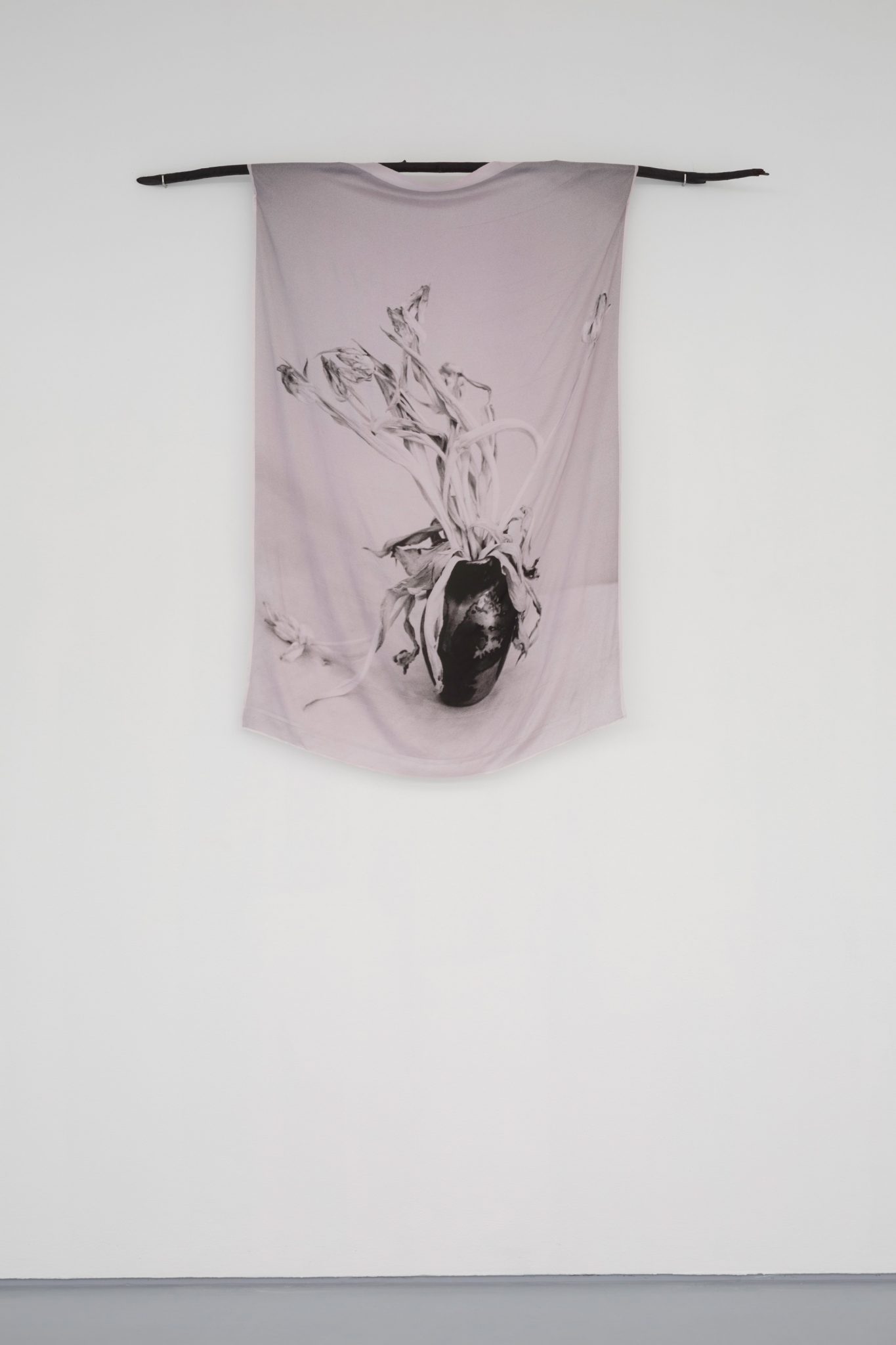