CAMPLE LINE is delighted to host SPOLIA, an exhibition by artist Lorna Macintyre, which brings together two recent photographic installations and a group of four new works entitled Stone Quartet made for our upstairs space.

Amongst the works included there is a common focus on stone—its geographical sources and its material and tactile properties—and on the reuse and transformation of materials. Macintyre’s choice of title for the exhibition—SPOLIA—invokes these preoccupations: stone, repurposing, transformation. A term that usually describes the reuse of building stone or architectural fragments in new contexts, Macintyre’s re-purposing is applied to an array of physical artefacts—found stones, marble off-cuts and samples, ceramic forms, and crystallised obsolete everyday objects. Their arrangements are brought into poignant counterpoint with
photographic images taken by Macintyre of rock formations—at nearby Crichope Linn as well as the Inner Hebrides and Argyll—and of objects once held in Dr Grierson’s Museum at its New Street location in Thornhill from 1872 to 1965 and now in Dumfries Museum.

Solid Objects (Staffa) and Solid Objects (Eigg), the two existing photographic installations included here alongside Stone Quartet, are the outcome of playful experiments with photography and materiality. They both comprise silver gelatin prints of coastal stone formations photographed in close-up on the islands of Staffa and Eigg in 2016. Macintyre then toned the photographs with drinks such as Vimto, Irn-Bru, Cola, Limeade and Orangeade, which are literally absorbed into the paper, becoming a material in the work. In choosing to use soft drinks, she subverts the kinds of toning practices pursued by such photographers as Edward S Curtis, who toned some of his photographs gold in order to enhance their aesthetic impact and perceived value.The orange, pale yellow and blue hues give depth to the contrast of shadows and light in the prints and accentuate the enigmatic nature of the stony images. By placing the photographs themselves on narrow polished marble shelves, Macintyre invites a curious dialogue between stone-as-image and the ‘real’ stone it sits upon.

In Stone Quartet, Macintyre extends the dynamic between stone and photograph further again, and across the four new works there is an interplay between stone as image, as physical material, as geological form, as numinous matter and as cultural object. Whilst developing this new work, Macintyre has made reference to Alan Garner’s The Stone Book Quartet, published originally in 1976 and containing four short stories that feature several generations of Garner’s own family, including his great-grandmother Mary and her father Robert, a stone mason. In the first story—The Stone Book—stone is both a formative and transformative medium for young Mary: its artefactual presence underpins her story, be it in the form of the lofty stone spire of the church her father is building, the cavernous geological formations and markings that he sends her to find, the stone book that he makes for her, or the field stones she carries home:

Most pickers left their stones on the dump at the field end, but Mary brought the best of hers home and cleaned the dirt off, and Father looked at them. In the field they were dull and heavy, and could break a scythe; but on the table each one was something different. They were different colours and different shapes, different in size and feel and weight.

The image of Mary and her father examining stones at the table has particular resonance with Macintyre’s Stone Quartet (Dalbettie Granite), 2017. On a surface of polished Dalbettie granite, she has assembled images of stone taken at locations such Singing Sands on Eigg, Fingal’s Cave on Staffa or at Kilmartin. Individual images, sorted through and found, Macintyre has selected them for particular qualities in the image and in the stone that they picture. The images that she includes are brought into an associative play through processes of placement and overlay in relation to surface, and her related use of toning and photographic detail. Laid flat under single or double sheets of glass the images form something of a terrain themselves, their rich tones and contrasts and their strong forms prompting sensory and emotional responses. This sense of terrain extends across to the small horizontal sandstone shelves in Stone Quartet (Crichope Linn), 2017, salvaged from old quarrying cast-off, and upon which Macintyre has sat a group of four silver gelatin prints of various stone faces and views at Crichope gorge. Mindful of the interlacing of the gorge’s cultural and geological history, and its use for the extraction of building stone, Macintyre’s images present Crichope as stony but otherworldly.

Under the glass of Stone Quartet (Dalbettie Granite) there are also three small black and white prints featuring objects previously in Dr Grierson’s Museum. Two prints show the two sides of a battle axehead retrieved from nearby Barndenoch, and the third showing a small group of modest domestic items. Their inclusion here draws us back towards the object and more particularly the persistence of the object. Closeby Macintyre has hung the large single print Stone Quartet (Amethyst), 2017—itself an image of a small amethyst also from Dr Grierson’s Museum and toned with red wine in reference to the roots of the word Amethyst in Greek— ‘not’ ‘intoxicated’. Macintyre has also referenced 16th century stories of the Greek god Bacchus, who pursued a maiden named Amesthystos, herself turned into a white crystal over which Bacchus then poured wine. Relating stone-as- object to objects recent and old, Mactinyre has then laid slim Carrara marble off-cuts on the window ledges, upon which she has placed an ipod and a remote control, both crystallised in petri dishes with salts and food colourings to invoke the colour of Amethyst. Discarded everyday objects, they are subjected to natural processes and repurposed here as poignant foils to those objects placed by Dr Grierson beyond everyday use and now preserved in Dumfries Museum. 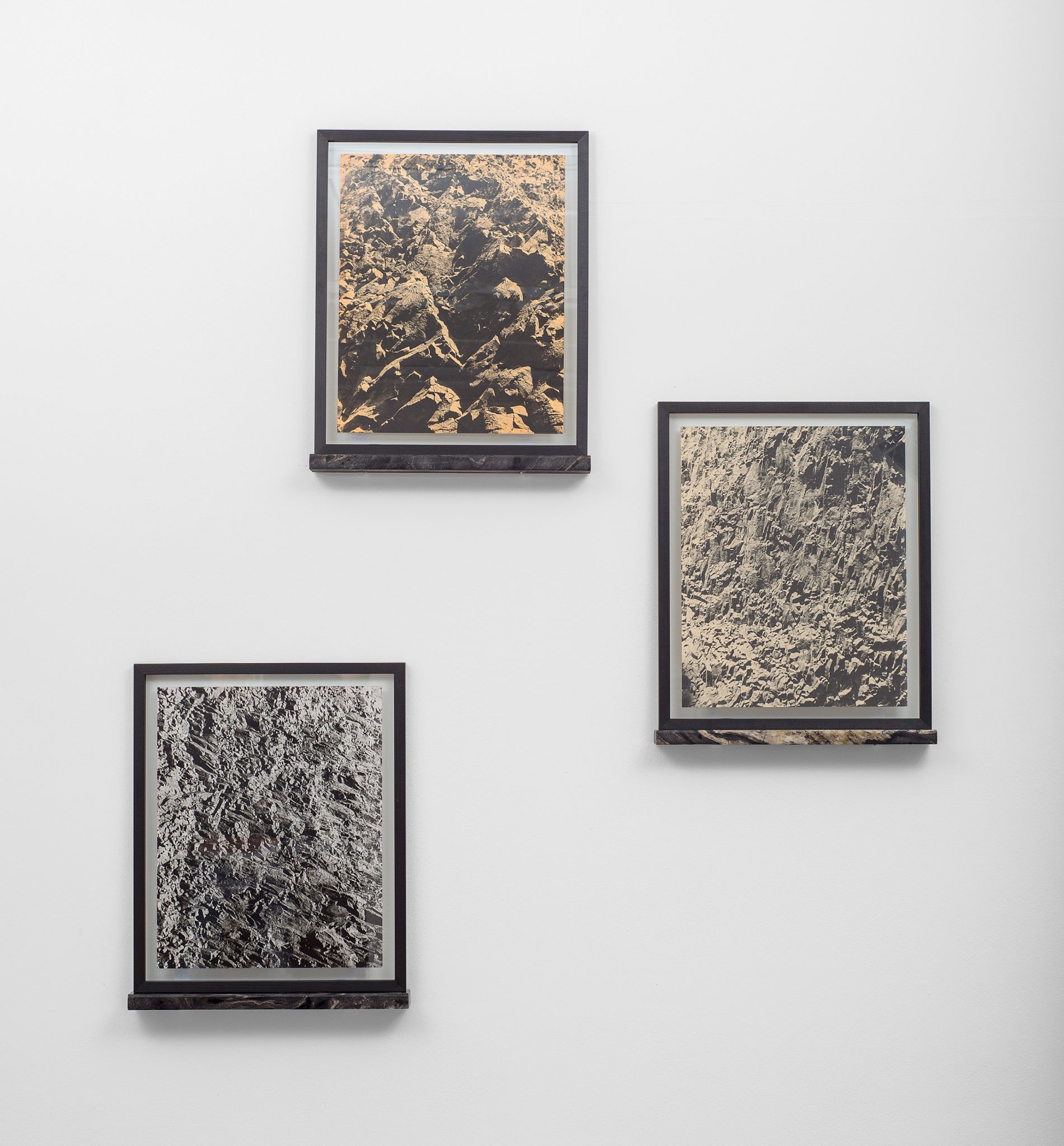 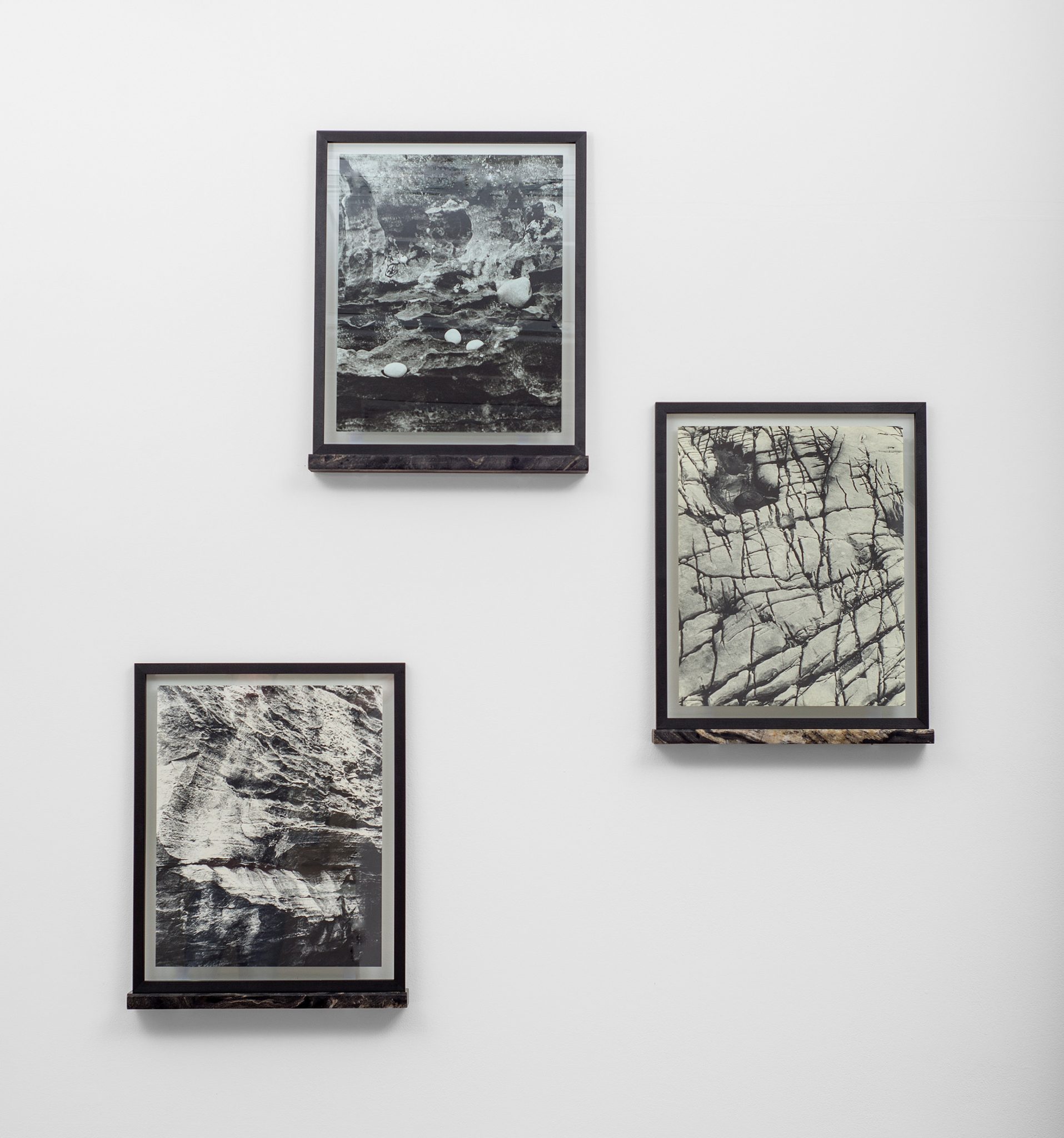 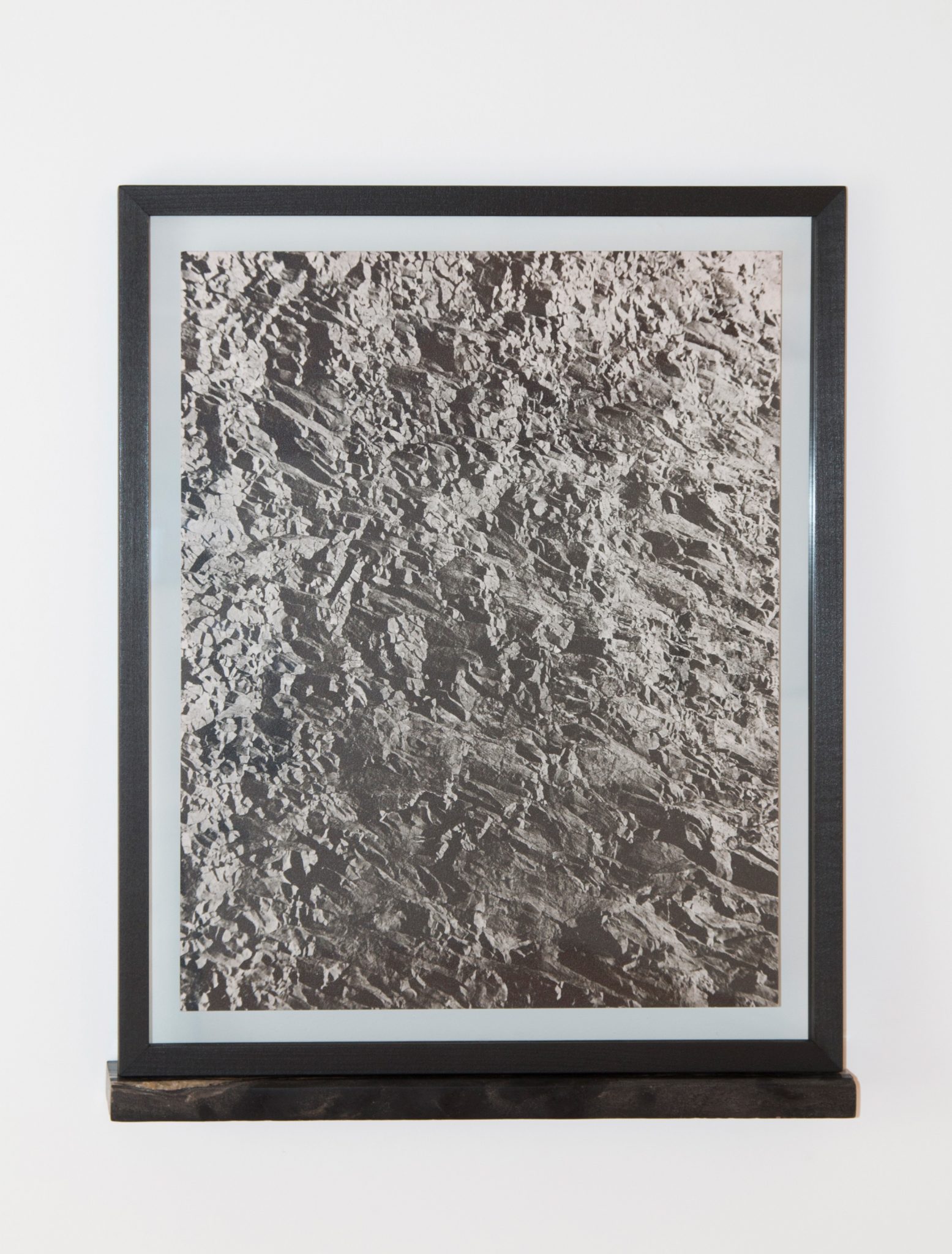 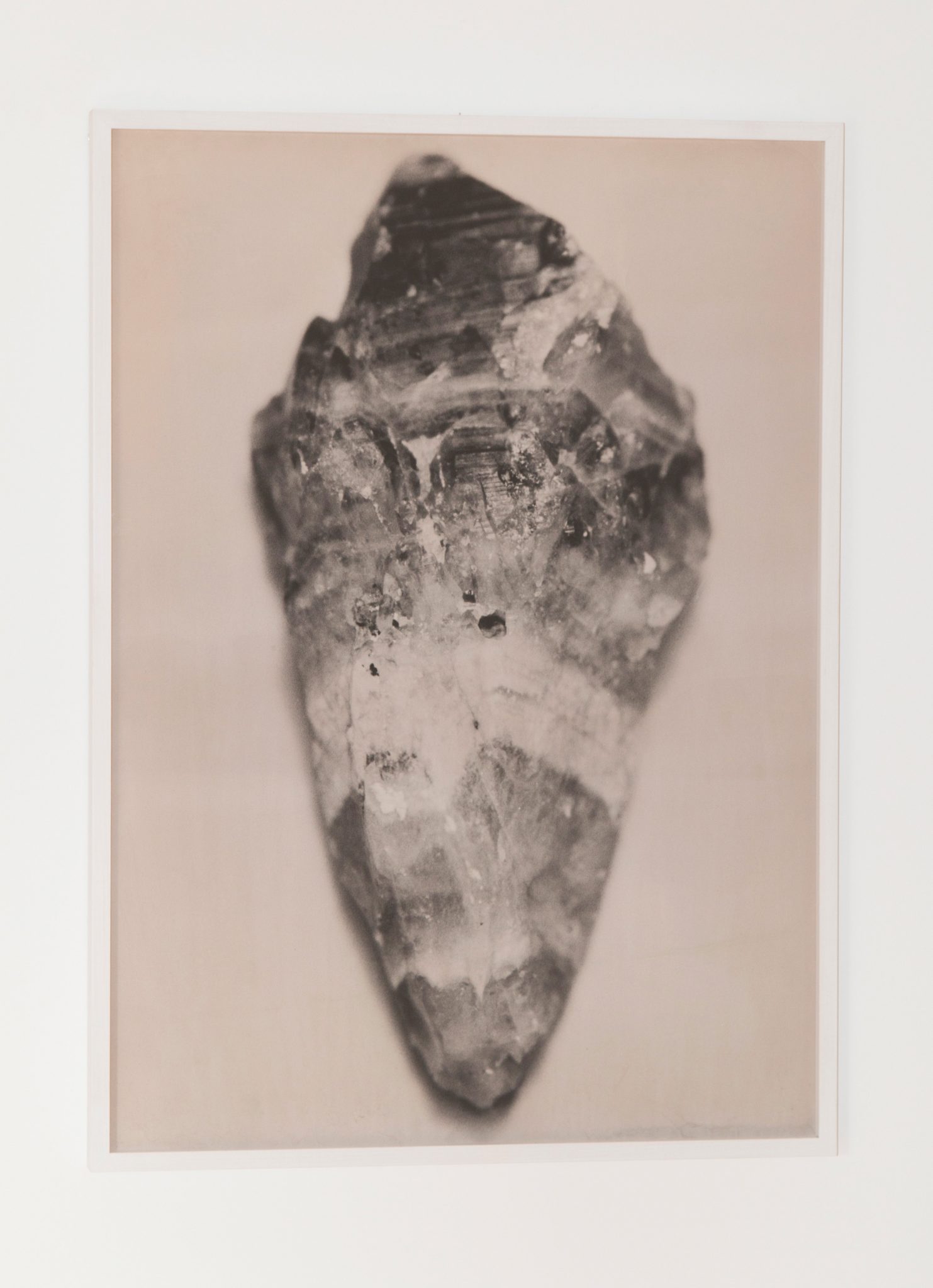 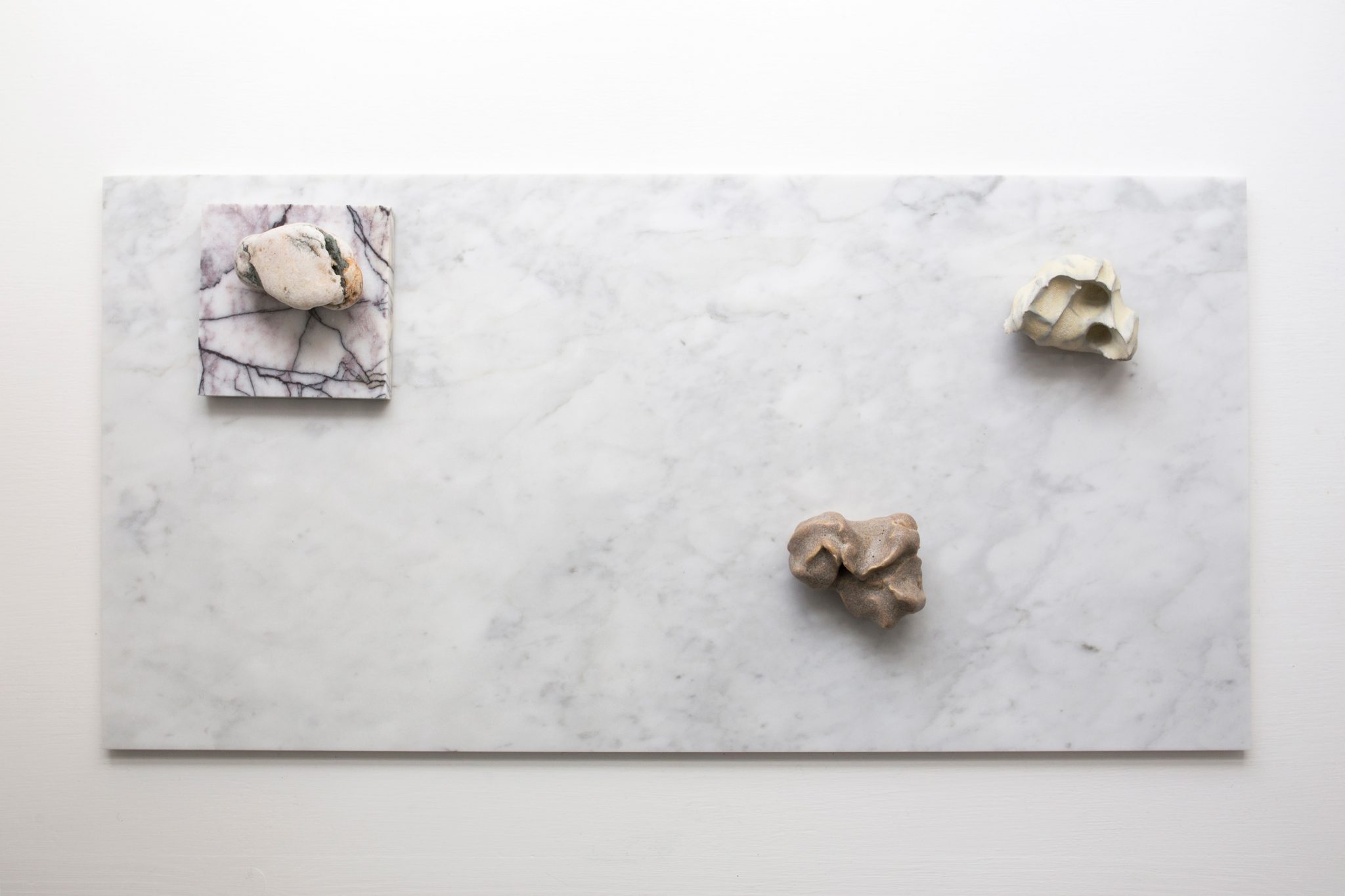 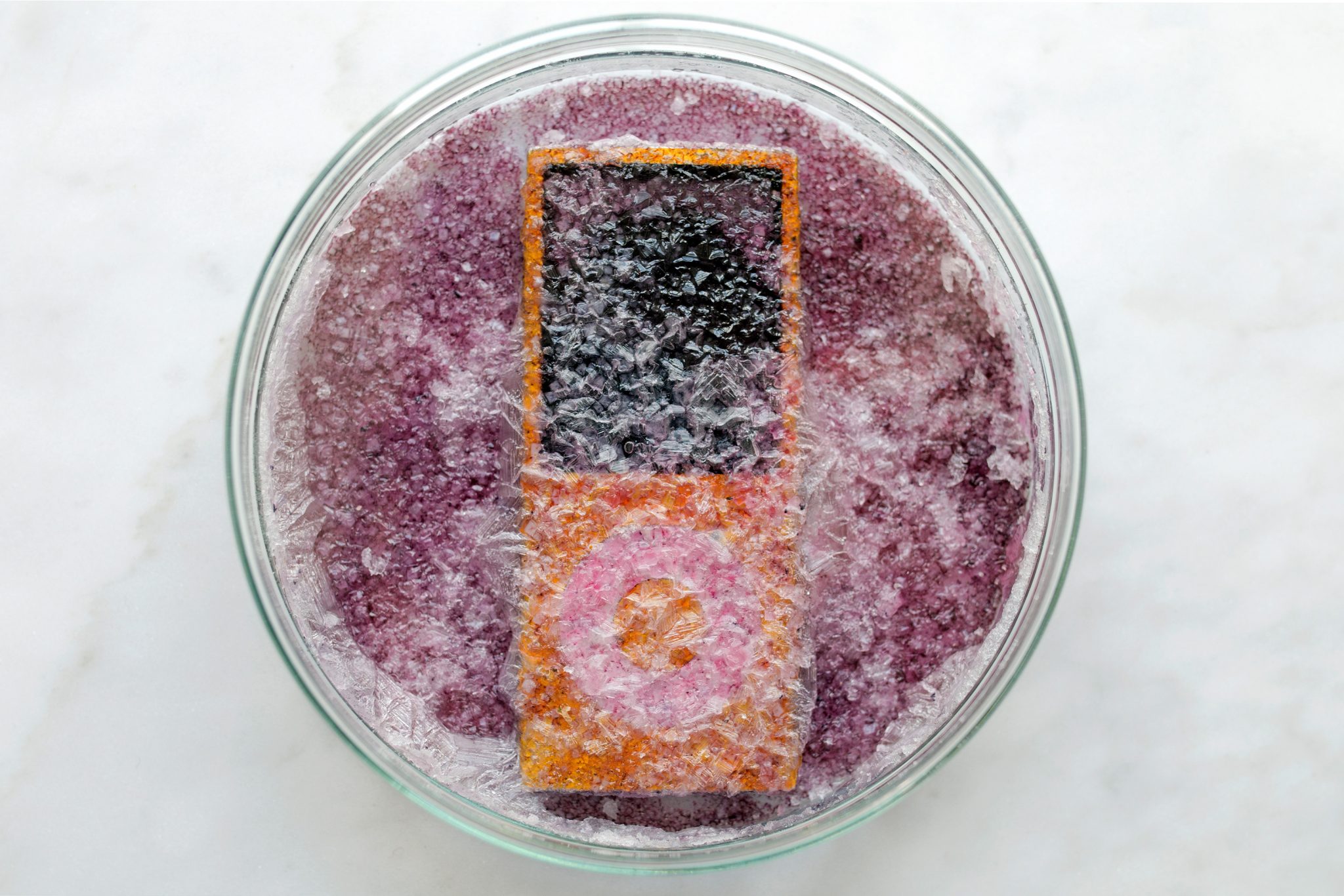